24-year-old Saraswati is a self-taught make up artist from Malaysia who has 68,000 followers on Instagram is a modest Muslim fashion blogger she uses her hijab to transform into her favorite characters.

One of her most recent looks was inspired by Beret Girl from An Extremely Goofy Movie.

She also created a look of  Joker from American psychological thriller film Joker.

Sarasvati said that she was inspired to become a makeup artist in 2008 when she was fighting with depression.

She further said that Joker from The Dark Knight was the first character makeup she did. And in 2009, she discovered Promise Tamangon on YouTube. She added that was so inspired by her and her passion for makeup has grown since then.

she said that she is breaking the stereotype that Muslim women are oppressed and she has introduced the world to the Islamic makeup artist Disney-inspired looks. 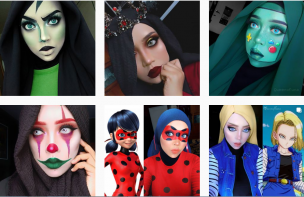 Who's got the power? WE GOT THE POWER! 👊 So here’s the trio! 💙❤💚 Don't worry guys, I'm not done with this series yet. 😉 BTW thank you @powerpuffgirls for sharing my work 🙈, I never imagined a cartoon show I grew up watching all my life has acknowledged and shared my work!! 😱😭 Also thank you all my IGfam for the love on these looks! I rrreally appreciate it. 🖤 . . . #powerpuffgirls #thepowerpuffgirls #powerpuffgirlscosplay #powerpuffs #cartoonnetwork #ppg #blossom #bubbles #buttercup #superheroine

PIA acquired a plane on an expensive lease during tenure of PML-N, Ghulam Sarwar

The Passengers of Pakistan International Airlines stranded in Malaysia will be brought...

Asif Zardari Admits To Hospital After His Health Deteriorates

Former President Asif Ali Zardari admitted to a private hospital after his...

Orange – A Power Fruit In Many Ways

Orange is known to have several health benefits and is among the...

Top Pakistani Notables That Left Us During 2020

The global coronavirus pandemic made it an especially difficult year for celebrity...

Maryam Nawaz lambastes PTI saying, “Every day the masses are hit with an inflation storm”