The Khyber Pakhtunkhwa (KP) government will present its annual budget of Rs 923 billion in the provincial assembly today.

According to the details, the budget session would begin at 3 pm. Finance minister Taimur Saleem Jhagra will present the budget. 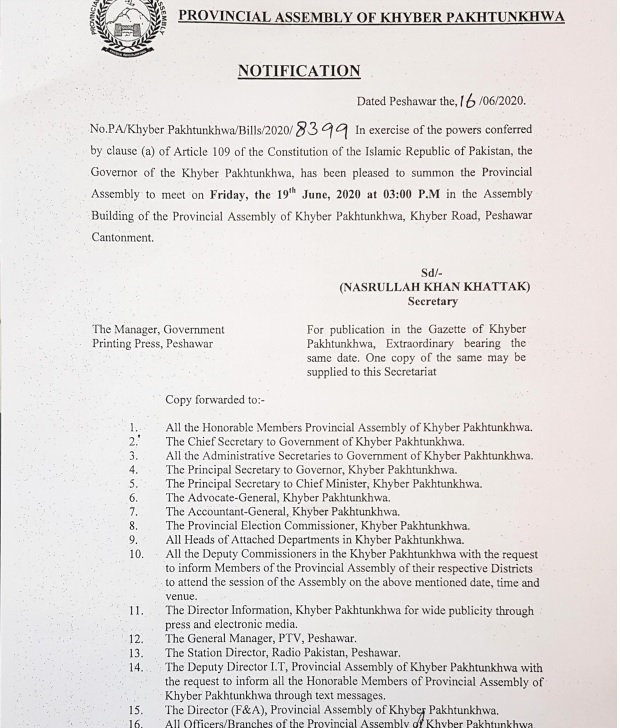 The total outlay for the 2020-21 budget has been allocated Rs 923 billion, which is 2.4 per cent more than the Rs 900 estimates for the current fiscal.

Breakdown of the revenue estimates shows that province is set to receive Rs 477 billion from the federal divisible pool, while the net hydel profit proceeds total Rs58.2 billion, including over Rs36 billion arrears.

The province’s own tax and non-tax revenue has been pitched at Rs 49 billion against the current fiscal’s Rs 53 billion estimates.

Tax receipts of Khyber Pakhtunkhwa for 2020-21 have been pitched at Rs 28.14 billion and non-tax revenue at Rs 21 billion.

The foreign project assistance will amount to Rs 85 billion.

Rs 124 billion has been allocated for the provincial component of government employees’ salaries.

However Rs 150 billion will go to the district level salaries.

Pension liability is likely to cost the province a whopping Rs 86 billion against the current year’s Rs 74 billion revised estimate.

KARACHI: The government has announced imposition of tax on the domestic electricity...

KARACHI: The government in the Federal Budget 2021/22 announced to abolish the...

Can You Drink Water After Eating Cucumber And Watermelon?

It is a common belief that drinking water after eating watermelon can...