Yasir Hussain on Tuesday commended ladylove Iqra Aziz for saying no to an advertisement offer of a fairness cream brand despite being promised a hefty amount of money.

Actor Yasir Hussain turned to Instagram to laud his fiancée in a detailed post alongside a loved-up picture with Iqra.

Iqra’s sister, Sidra Aziz, shared a picture on her social media that looked a lot like Iqra and Yasir’s engagement.

Iqra wore a white and gold outfit while Yasir pulled off a white shalwar kameez with a maroon waistcoat. 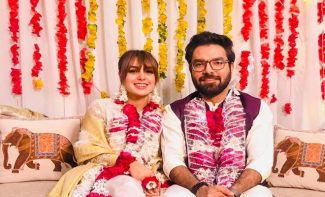 However, when the picture went viral on social media and more pictures followed, many people noticed some inconsistencies with Iqra and Yasir’s projected timeline of their engagement.

Fans were quick to notice that Iqra’s outfit and hairstyle resembled some pictures she had uploaded way back in February.

Peshawar Zalmi gave the target of 197 runs to Quetta Gladiator in...