Scarlett Johansson opens up about marriage with Ryan Reynolds

Scarlett Johansson recently opened up about her marriage with Ryan Reynolds.

The actress, who is ready to tie the knot for the third time, told that she didn’t really have an understanding of marriage.

The Avengers: Endgame actor, who is engaged to Saturday Night Live star Colin Jost, said “I romanticized” her relationship with the Deadpoll actor.

“The first time I got married I was 23 years old. I didn’t really have an understanding of marriage. Maybe I kind of romanticized it, I think, in a way,” said Johansson. 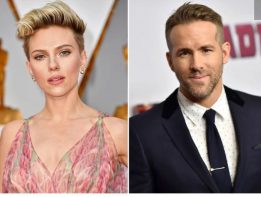 “It’s a different part of my life now. I feel like I’m in a place in my life, I feel I’m able to make more active choices. I’m more present, I think, than I’ve been before,” she said.

Talking about marriage, the actress said she likes the idea of building a family and having a marriage work.

Lion King Composer Files for divorce from his wife in LA

Oscar-winning German composer Hans Zimmer has filed for divorce from his wife...

J.K. Rowling Opens Up about her Coronavirus symptoms

Deepika Padukone shares songs she listens to during quarantine

Deepika Padukone is quite active these days on social media and she...

Air pollution increases chance of being affected by COVID-19

Finally it is revealed that being old and having week immune system...