Since after PTV started to on-air hit Turkish drama serial Dirlis Ertugrul in Urdu, Pakistanis could not resist themselves from connecting with it in deep and personal ways.

There could be uncountable reasons for people to love this Turkish drama serial, but its powerful Quranic references is one common reasons that connected not only Pakistanis but Muslims all around the world with Dirlis Ertugrul.

When the show is over, the person can’t help but admire all of the show’s lessons and teachings depicted through the characters. The whole series is divided between good and evil. The Quran references further add emotional value to Pakistan’s audience. Throughout the series, the struggle between good and evil, and ultimately the triumph of the good makes the whole show worthy to be watched by everyone.

On Tuesday, Ertugrul Ghazi is trending in Pakistan on Twitter. 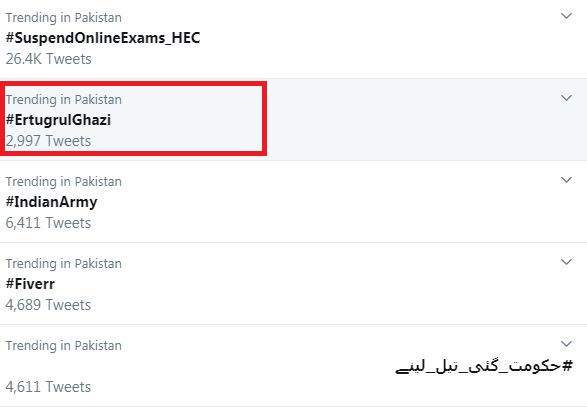 Twitterites are praising the show and uploading their favorite characters, scenes, and dialogues. Have a look!

Ibn Al-Arabi one of my favourites. The way he talks and delivers dialogues is just amazing.#ErtugrulGhazi pic.twitter.com/tjwaLyBYTV

Children are seeds if you feed them well and grow them well you will get good harvest.
Ibn Ul Arabi#ErtugrulGhazi pic.twitter.com/4LRjagABVa

“You can identify the brave during battle, and good friends with their advice” #ertugrulghazi pic.twitter.com/aTrdgtbCHe

“Do you think you can scare me?
I have only one life, and that belonges to ALLAH”.
“Turgut Alp (Noor Gul Gazi)” ⁦❤️⁩#ErtugrulGhazi pic.twitter.com/k5sIVxERA7

If your favourite character in Ertughrul is Ibnul Arabi,You will be free of depression now 💕

The Greatest Lesson we learned From #ErtugrulGhazi is:

“If ALLAH is with You, it Doesn’t Matter Who is Against You” #ErtugrulUrduPTV pic.twitter.com/NahVuhHkym