TikTok star Jannat Mirza, who recently made her debut in Bilal Saeed’s song video “Shayar” has opened up about the bullying she has been facing ever since she announced the news of appearing in a song.

Taking to her Instagram story, Jannat lashed out at people for tarnishing her reputation as she started to take a step forward in her career. Recently, people shared fake photos of the TikTok star and tried to assassinate her character.

“First they hacked my account before my song was released. After it was released, they banned my account. Now I have signed a movie, people have started posting my fake photos.”

“Why are people so jealous of someone’s success?”

Jannat wanted people to at least respect the girl whose picture they have been using to damage Jannat’s character.

“At least respect the girl whose pictures are being used as me.”

She concluded by requesting her fans to stand by her side during this tough time.

“I request my followers to stand by my side so that we can fight against such jealousies,” said Jannat. 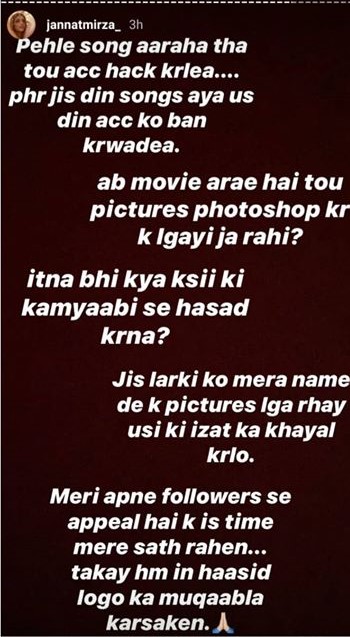 Bilal Saeed's One Two Records on Friday released a new song by...