Rihanna had come under fierce criticism after models at her latest fashion show danced to a song which appeared to remix an Islamic hadith.

On Friday, Rihanna launched Savage X Fenty Volume 2 and during the show, she hurt the sentiments of her Muslim fans.

Viewers noticed that in one segment of the show, models danced to a song called “Doom” by London-based producer Coucou Chloe. The song samples a narration of hadith.

Muslims and non-Muslims alike took to social media to criticise Rihanna, accusing her of disrespecting Islam by using the sacred text in a sexualised context.

However, the artist-turned-designer said it was an ‘honest mistake’ and that she feels ‘incredibly disheartened’.

Addressing the matter, Rihanna penned a note on Instagram, “I’d like to thank the Muslim community for pointing out a huge oversight that was unintentionally offensive in our savage x Fenty show,” she wrote.

The singer added that she did not intend to disrespect any religion.

“I would, more importantly, like to apologize to you for this honest, yet careless mistake. We understand that we have hurt many of our Muslim brothers and sisters, and I’m incredibly disheartened by this! I do not play with any kind of disrespect toward God or any religion and therefore the use of the song in our project was completely irresponsible! Moving forward we will make sure nothing like this ever happens again. Thank you for your forgiveness and understanding, Rih,” she added. 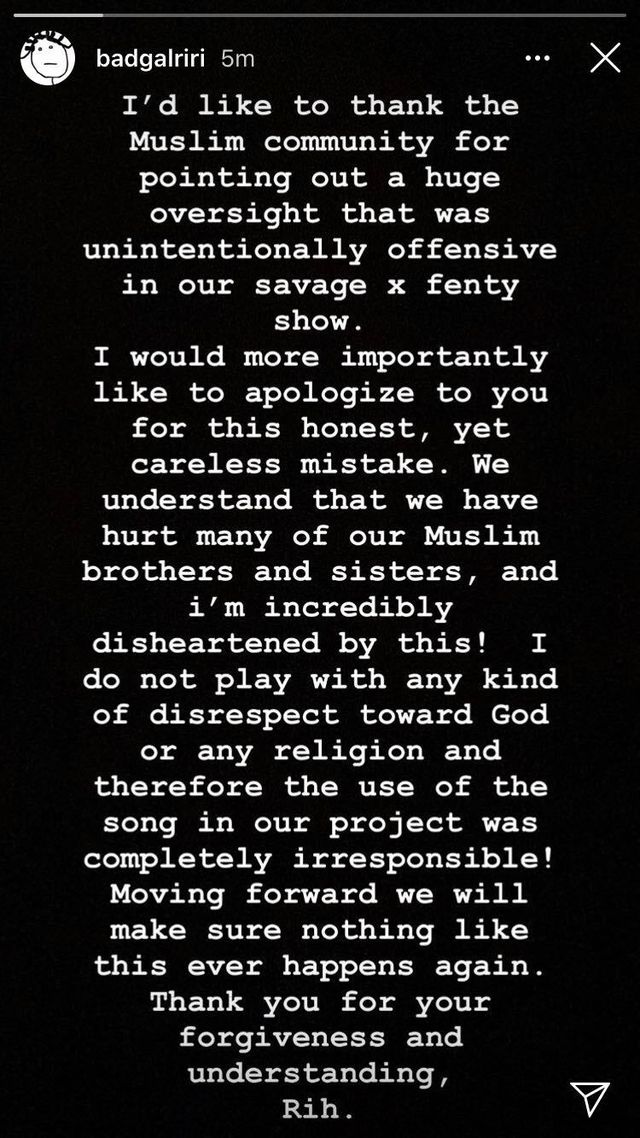 Before Rihanna’s apology, her followers on Instagram flooded her comments to point out that in Islam, it considered forbidden to use Allah’s name, the words of the Quran or the prophet Muhammad impolitely.

The followers urged her to educate herself and issue an apology.