Sonya Hussyn shuts down a troll with a befitting reply

Sonya Hussyn shuts down a troll with a befitting reply

Sonya Hussyn, the talented Pakistan’s actress, is well-known for her acclaimed acting skills as she pulls off any character so perfectly.

As the stars receive appreciation, there are even a lot of haters they have to deal with. Similarly, Sonya Hussyn was criticized by a social media user who asked the actress to control her lingerie item’s straps which can be easily seen during her drama.

However, the Mohabbat Tujhe Alvida starlet jumped right in to reply that user and slammed the remarks he/she had given over her visible lingerie item.

Sonya wrote, “So???? What if its visible? Why is that a problem for you? “Bra” hoti hi islye ha k ap jese body scanners sy breast chupaya ja saky!! But if you are still getting distracted or aroused by a piece of cloth than it’s your problem buddy. Stop making women uncomfortable all the time.”

She gave a befitting reply to shut down the trolling and asked the concerned user not to make women uncomfortable by using such inappropriate remarks. 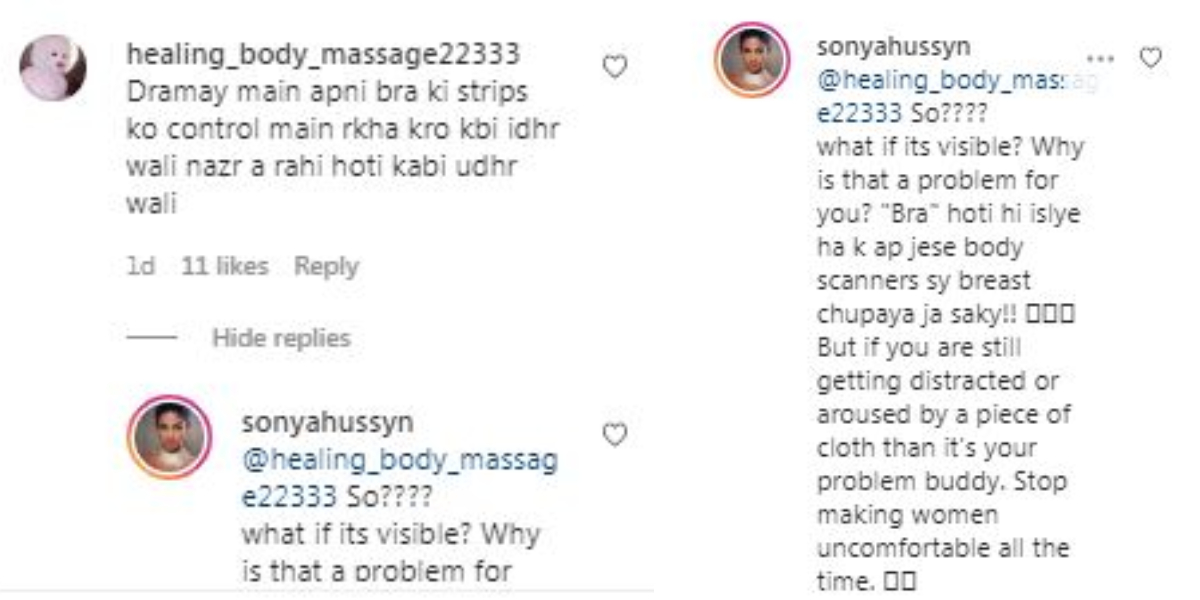 Sonya Hussyn’s name alone guarantees viewership and public interest. Her performances always leave an impact and she makes sure that all her projects are different from each other.

She is really focused on her career which is why we saw her in three of the biggest dramas this year.

Ishq Zahe Naseeb, Saraab and Mohabbat Tujhe Alvida were three of Sonya Hussyn’s projects this year and each one of them showed a different side of the actress.

She excels in making the viewers relate to the characters she plays.

However, her fine acting in her current drama serial Mohabbat Tujhe Alvida, there is no denying the fact that the actress is the most talented leading ladies of the television industry right now.

Every year she mesmerizes the viewers with her top-notch performances.

Sonya Hussyn Shares Photo Depicting Her Hanging Out In Snow

Watch: Disha Patani looks like a doll in Latest Photoshoot

Countries have made COVID-19 vaccinations compulsory for health professionals and other high-risk...

Prices of chicken, pulses, other food items go down

ISLAMABAD: Prices of various food items witnessed a declining trend during the...

KABUL: At least 100 Taliban militants were killed and about 90 others...