Singer Adnan Sami, who rose to fame in the Pakistani music industry and settled in India, reacted to the release of his son Azaan Sami’s first solo music album.

He expressed good wishes as he commented on his son Azaan Sami’s Instagram post, saying that he is proud of his son. 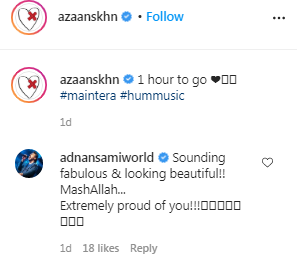 Renowned musician and singer Azaan Sami Khan released the first song of his first solo music album ‘Main Tera’, which became popular as soon as it was released.

The lyrics of the song ‘Main Tera’ have been written by Azaan Sami Khan himself and the director of the video is Mohammed Ehteshamuddin.

“Main Tera” is a romantic song whose video is based on the main idea of ​​the song i.e. love. The song uses soft vocals and is different from other traditional and conventional songs.

US Woman Arrested For Driving Around Two Dead Kids For months

An American woman was arrested with the dead bodies of her young...