Fans throughout the world loved Adnan Siddiqui for his personality and stunning acting. His fans adored him for his good looks and superb acting in Mere Paas Tum Ho and Yeh Dil Mera. The actor is outspoken and frequently shares his opinions.

Adnan Siddiqui recently shared his opinions on the National Anthem, which was sung at the Lux Style Awards by Shehzad Roy and local musicians. To improve the anthem, the musicians played extra instrumental pieces. Adnan Siddiqui believes that by incorporating more music into the national song, the musicians have disregarded it.

The Lux Style Awards are the biggest media awards ceremony in Pakistan....

He asked, “Is it appropriate to take creative liberties with our National Anthem, which was composed to instil in us patriotism and remind us of our nation’s glory? Does our Constitution permit anyone to improvise/remix the Tarana in the guise of creativity? It’s always played in the original rendition at matches, tournaments, other state functions. At a famous award show, artists however, fiddle with the National symbol and possibly get away with it too. Personally, I find ‘remix’ of the Tarana disrespectful. Thoughts? 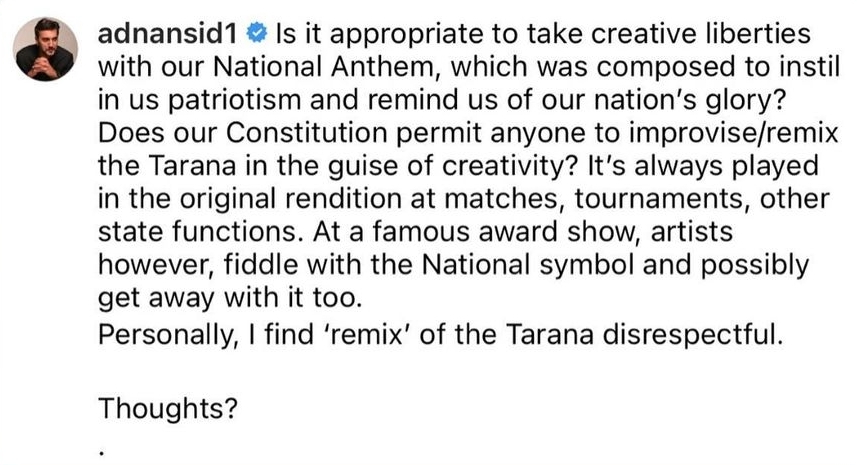 The national anthem that was played at the Lux Style Awards 2022 can be seen in this video.

When he asked the fans what they thought, the majority of them disagreed with him and indicated that Tarana sounds wonderful and is enjoyable to listen to. A few people supported his position, but the majority felt it was uncalled for and unjustified.

The Pakistani entertainment sector presently hosts a number of award ceremonies where...

Prince Harry and others expected to make headlines in 2023

Hera Pheri 3: Akshay Kumar could be back as Raju, insiders