Bollywood stars Kareena and Saif Ali Khan are couple now but before the wedding Kareena was treated as a child by Saif.

Saif has done movies with Kareena’s sister Karishma Kapoor and  that time Kareena was treated as a child by Saif and others on the set.

It is to be noted that Saif Ali Khan tied-the-knot with Kareena Kapoor on October 16, 2012. It is India’s first wedding where Kapoor family gets into relation with The Nawabs of Pataudi.

Kareena at Saif’s first wedding, wished him and Saif replied, “Thankyou beta” so it means time can change beta to wife. 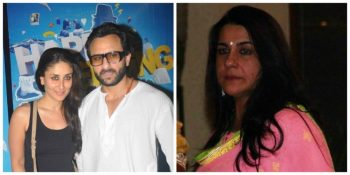 Saif Ali Khan and Amrita Singh married and had a good married life. However, sources said that things did not go well and they decided to head for a divorce.

Both Amrita and Saif Ali Khan had remained the talk of the town, as both kept discussing the topic on media in several interviews.

However, news recently came out that Saif Ali Khan has openly apologized to her ex-wife Amrita on camera.