According to the Press Release, OnePlus Flagship Smartphones are officially distributed and sold by United Mobiles in Pakistan as per agreement between the two companies.

The latest partnership between one of the most renowned Telecom Distribution Company, United Mobile and premiere mobile devices firm, OnePlus has seen the light of day and now interested customers can officially get their hands on the latest OnePlus phones anywhere in Pakistan along with legit after-sales services provided by the company.

United Mobile has been in the telecom industry of Pakistan since 20 years now. The company has distributed various mobile brands in Pakistan along with the launch of their own, VOICE Mobile which is one of the first locally assembled mobile phones to be available in the country. Now, the distributors have managed to get OnePlus on board. The phone brand is one of the best in the world and previously was being sought by many Pakistanis due to its rising popularity around the world.

A younger company compared to its competitors, the OnePlus phones have garnered admiration in the phone market with its models such as OnePlus 9 Pro, OnePlus 8 and many others. The phones, on many instances, are compared with models introduced by tech giants such as Samsung, Huawei and Apple. However, the phones were not officially available in the Pakistani market as the country was not included in the distribution plans of the company before.

However, the recent press release has all but confirmed that OnePlus phones have officially entered the Pakistani market. The Press Release states, ‘United Mobile understands the needs and expectations of the consumers in this region, and with mission to offer its customers the highest quality products and services, we have joined hands with OnePlus, being the official partner, and authorized distributor of OnePlus in Pakistan’

As per the Press Release, OnePlus flagship phones will now be available at all retail and etail (online stores) of Pakistan.

Along with distribution of OnePlus flagship phones, both United and OnePlus have partnered to provide after-sales service to customers. Furthermore, a premier membership program by the name of Red Cable Club is also introduced that will provide exclusive benefits to those who join. The benefits are as follows:

As per the Press Release, United Mobile believes that it has led the technological revolution in Pakistan as the digital era in the country dawned. Since it is their mission to equip every Pakistani with the best of tech, the company has also opened a local assembly plant which is not only one of the first in Pakistan but also one manufactures their own brand, Voice Mobile, which has been very successful amongst the Pakistani people. A subsidiary of the company, United Communications, is tasked with manufacturing of mobile phones in the country to introduce the latest locally manufactured mobiles and eventually export them.

The mobile company aims to promote the ‘Made in Pakistan’ phrase all around the world on their journey towards tech supremacy. United Mobile stated in the Press Release, “It is a matter of immense honor that millions of customers trust us every year by buying our products, and we plan to keep delighting our customers in future as well, by offering best products, best values, and best services”

United Mobiles has also planned the perfect gifts for Pakistanis this Ramadan by offering OnePlus flagship phones at discounted prices. The company released the following flyer: 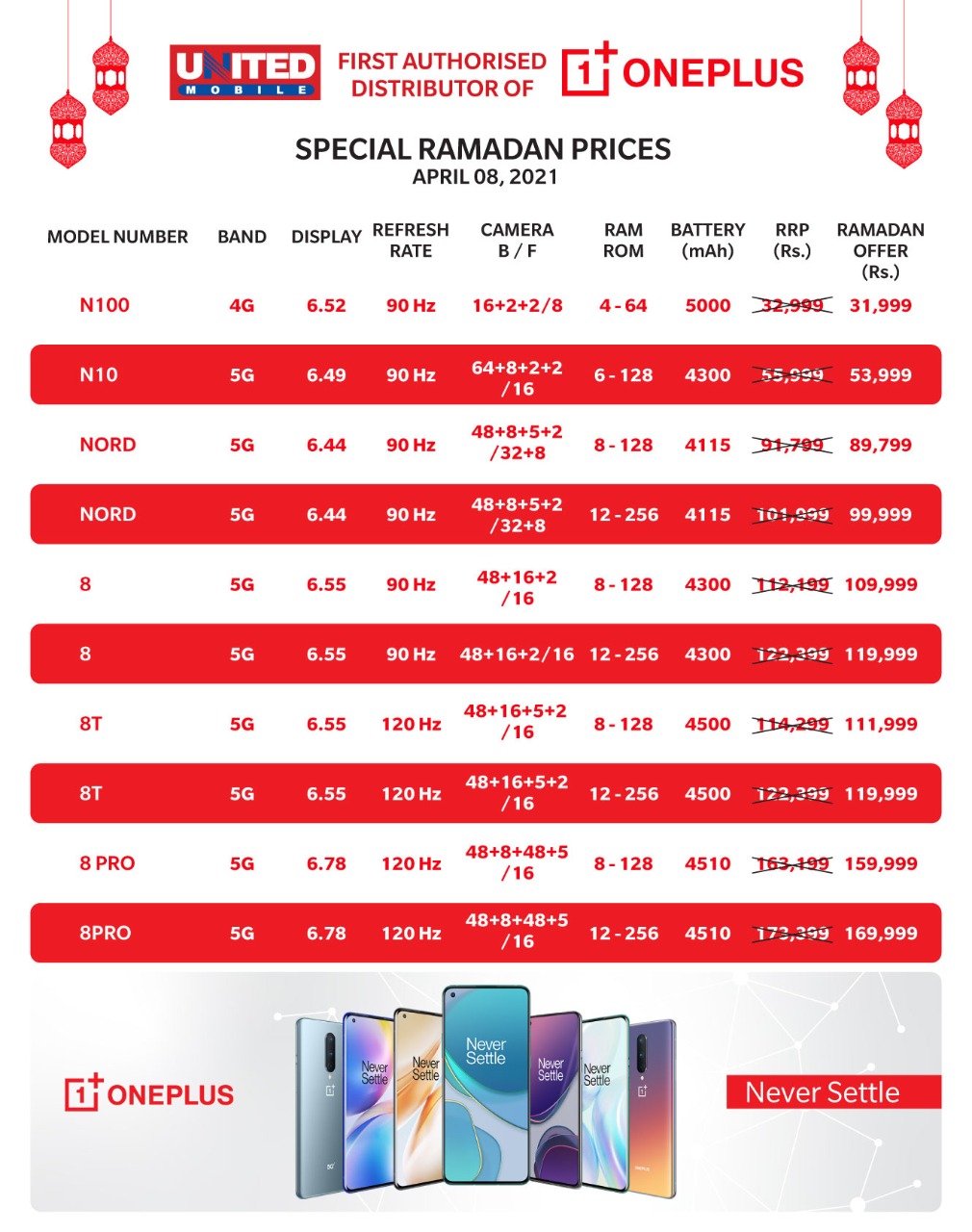 The company also stated that in case any of the customers find the prices of above models higher than this, they should report to complaints@unitedmobile.com.pk