MAP: How and when the Taliban took control of Afghanistan

MAP: How and when the Taliban took control of Afghanistan

After conquering 26 of the country’s 34 provincial capitals in the last ten days, the Taliban armed group is fighting for power in Afghanistan.

In May, as foreign forces began to leave the country, the armed group, which was deposed in a US-led invasion in 2001, stepped up its drive to depose the Western-backed government.

Following maps show how and when the Taliban took control of 26 of the country’s 34 provincial capitals:

The Taliban took control of at least seven capital cities on Sunday, including Jalalabad, the capital of Nangarhar province, before encircling Kabul. 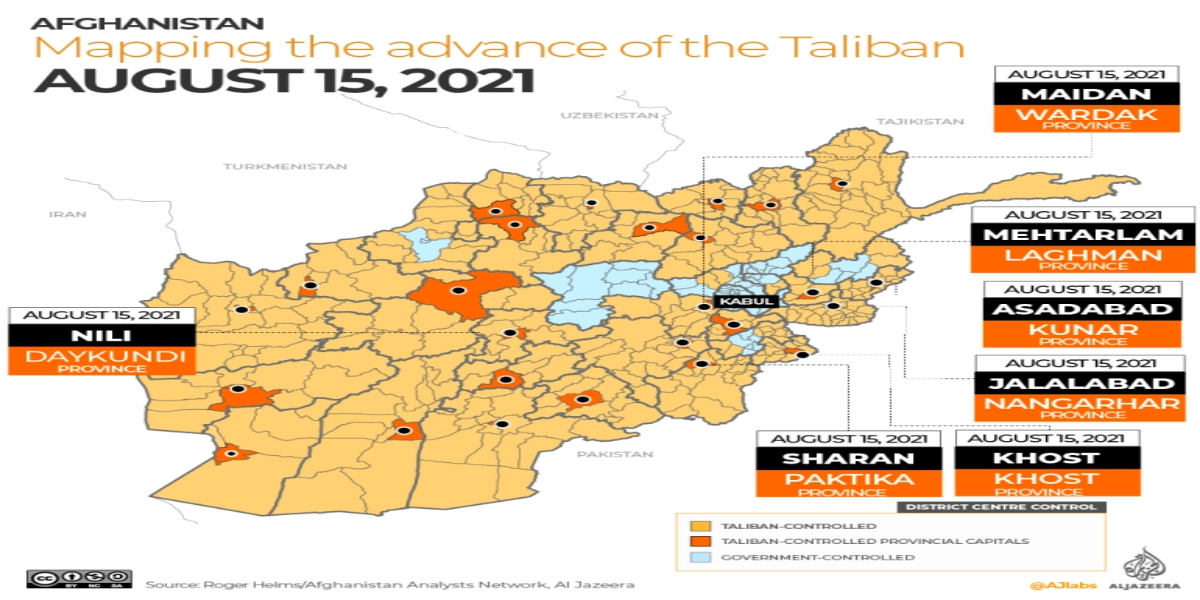 As it seized control of the whole north of the country, Taliban forces captured Mazar-i-Sharif, the country’s fourth-largest city with a powerful defense.

The Taliban conquered six capital cities on Friday, including the seat of Helmand province in the south. According to the security source, military and government authorities had departed the city after reaching an agreement with the group.

According to Al Jazeera’s Ali M Latifi, the Taliban also took control of Qal-e-Naw, the capital of western Badghis province. “The group temporarily took control of the capital earlier this summer before the government recaptured it in a matter of hours,” he said.

According to officials, Taliban insurgents took control of Feruz Koh city in Afghanistan’s western province of Ghor without violence.

The Taliban captured the capital of the central province of Logar and captured the governor and the head of the city’s spy agency.

The governor of the southern Uruzgan province fled to Kabul after the city was captured.

Over the span of a week, the seat of Zabul province in southern Afghanistan became the 18th city to fall to the Taliban. 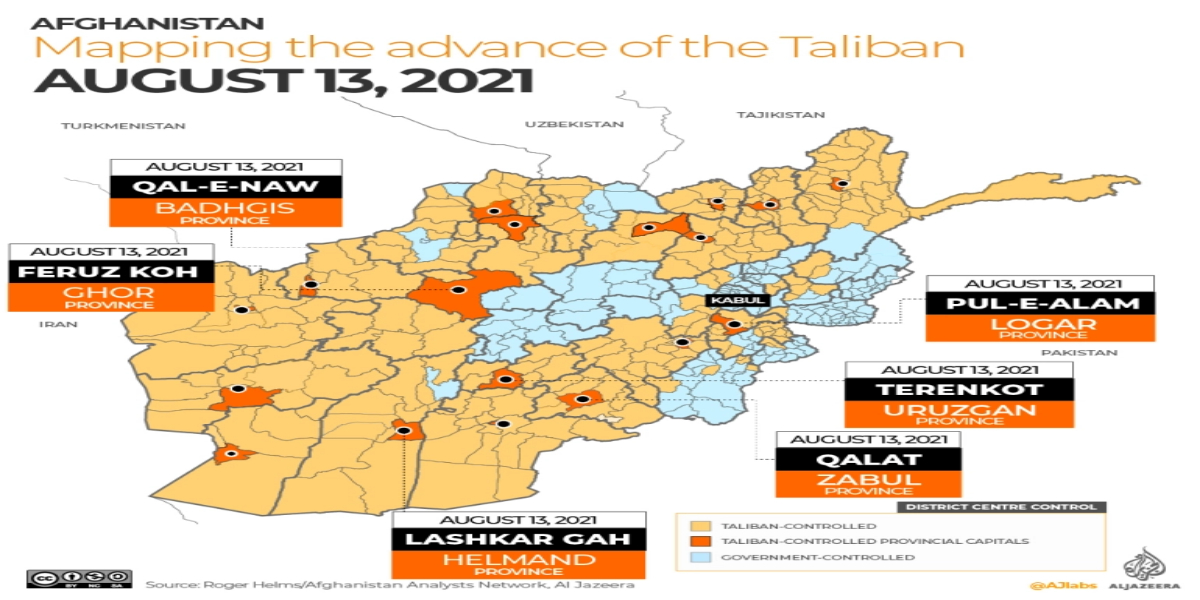 Ghazni, the capital of the southeastern province of Ghazni, collapsed on Thursday following severe battles around 130 kilometres (80 miles) southwest of the national capital, Kabul.

After two weeks of conflict, the Taliban captured the capital of Herat province in western Afghanistan, the country’s third-largest city.

In a major setback for Afghan government forces, the Taliban claimed to have conquered Kandahar, Afghanistan’s second-largest city and a former Taliban stronghold. 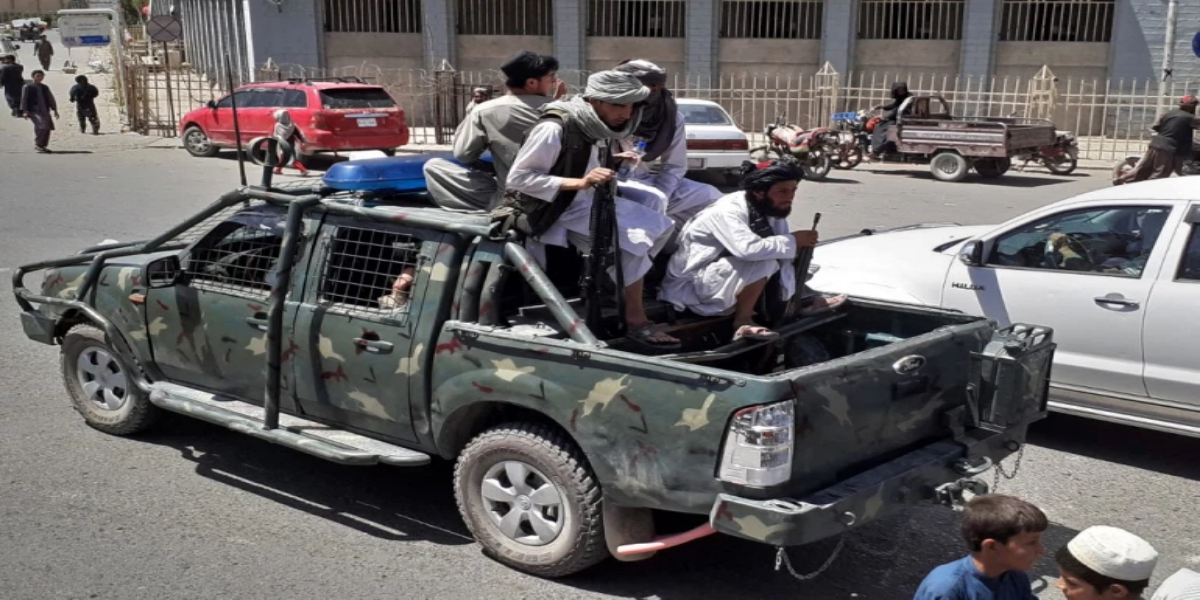 Taliban fighters are pictured in a vehicle of the Afghan National Directorate of Security on a street in Kandahar on August 13, 2021 [AFP]

According to an official, the Taliban have taken control of another city in northern Afghanistan, making it the group’s ninth province capital in as many days. Tajikistan, Pakistan, and China all share Badakhshan’s borders.

After a brief battle with security forces, the capital of the southwestern province surrendered to the Taliban, according to local sources. According to MP Abdul Nasri Farahi, the Taliban have taken control of the province’s central prison. Farah’s capture also provided the group with another border crossing into Iran.

According to Mamoor Ahmadzai, a politician, the capital of the northern province of Baghlan, roughly 200 kilometres (125 miles) north of Kabul, fell to the Taliban after about two hours of battle. With the takeover of Pul-e-Khumri, the Taliban now control a trifecta of northern provinces. 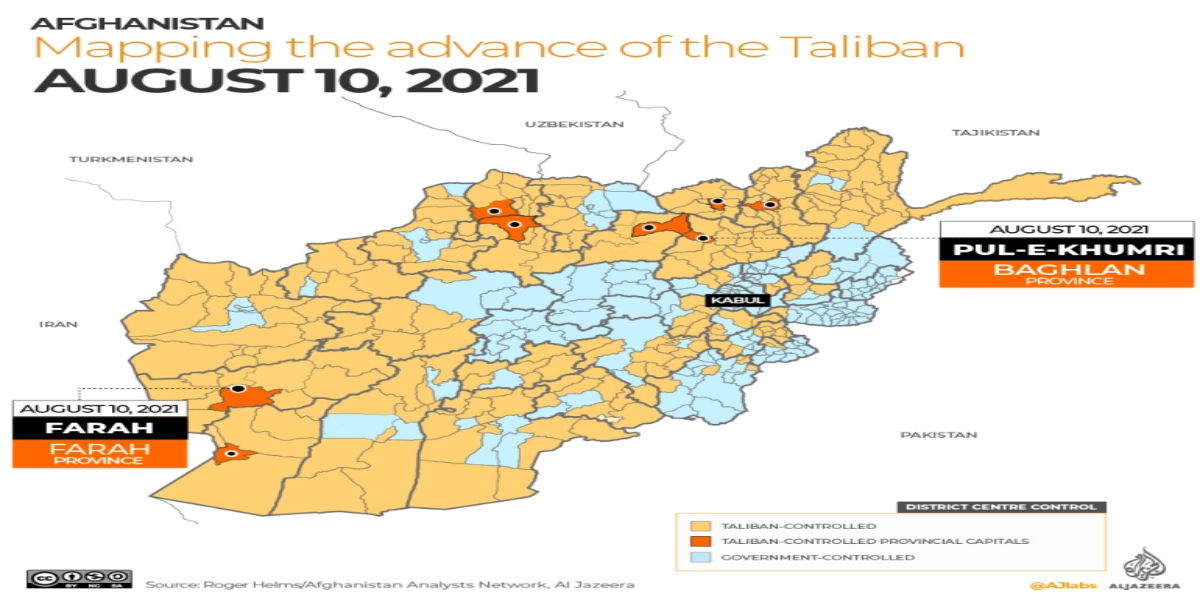 Samangan, the seat of Afghanistan’s northern province, was the sixth provincial capital to fall in four days. Samangan was once considered one of Afghanistan’s safest provinces, with only  minor Taliban presence.

The Taliban have taken control of the northern capital of Sar-e-Pul. It was the first of three provincial capitals to fall within a few hours of one another. According to Mohammad Noor Rahmani, a member of Sar-e-Pul province’s provincial council, the group had taken control of government premises in the capital, forcing officials to flee to a nearby military base.

Taliban forces have taken control of Afghanistan’s fifth-largest city, which has a population of 270,000 people. Kunduz is a strategic prize since it is located at the crossroads of mineral-rich northern regions and Central Asia.

In the evening, the Taliban took control of the capital of Takhar province, also in the north. They were successful in freeing prisoners and forcing government leaders to escape. 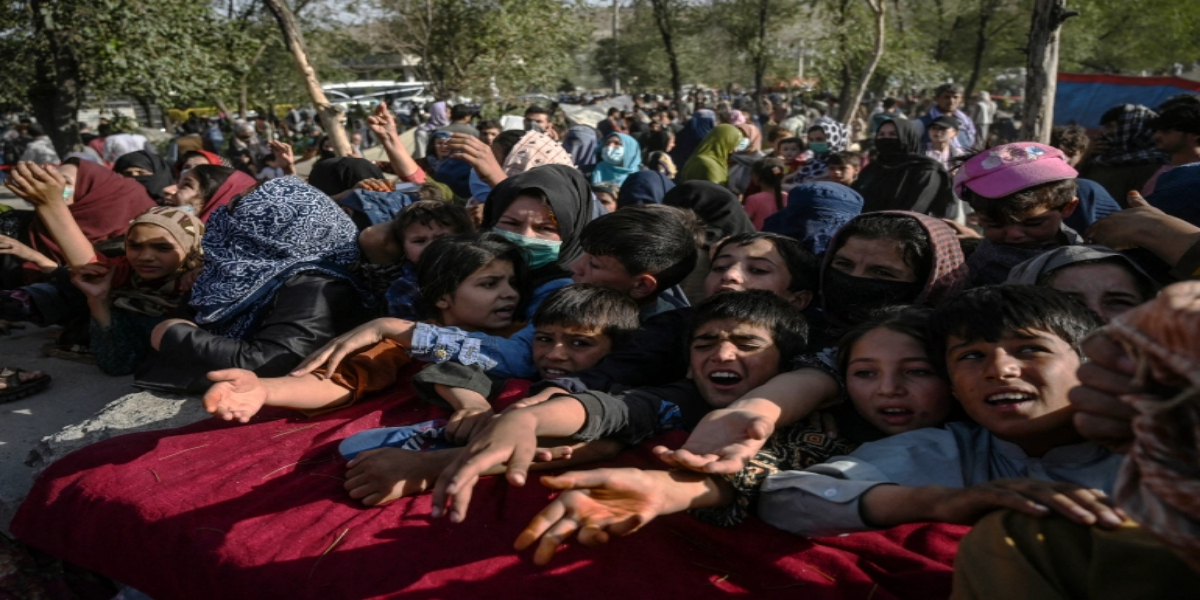 Internally displaced Afghan families, who fled from Kunduz and Takhar province due to battles between Taliban and Afghan security forces, collect food in Kabul on August 9, 2021 [File: Wakil Kohsar/AFP]

The Taliban claimed to have taken control of the whole northern province of Jawzjan, including Sheberghan, its capital. Heavy combat was reported in the city, and the Taliban took control of government premises.The city is home to notorious strongman  Abdul Rashid Dostum, who just returned to Afghanistan after having medical treatment in Turkey, lives in the city.

Since the Taliban began attacking Afghan forces in early May, the city of Zaranj has been the first provincial capital to fall to them.  Nimruz province shares a border with Iran and Pakistan, and Zaranj is considered among the war-scarred country’s famed historical cities. 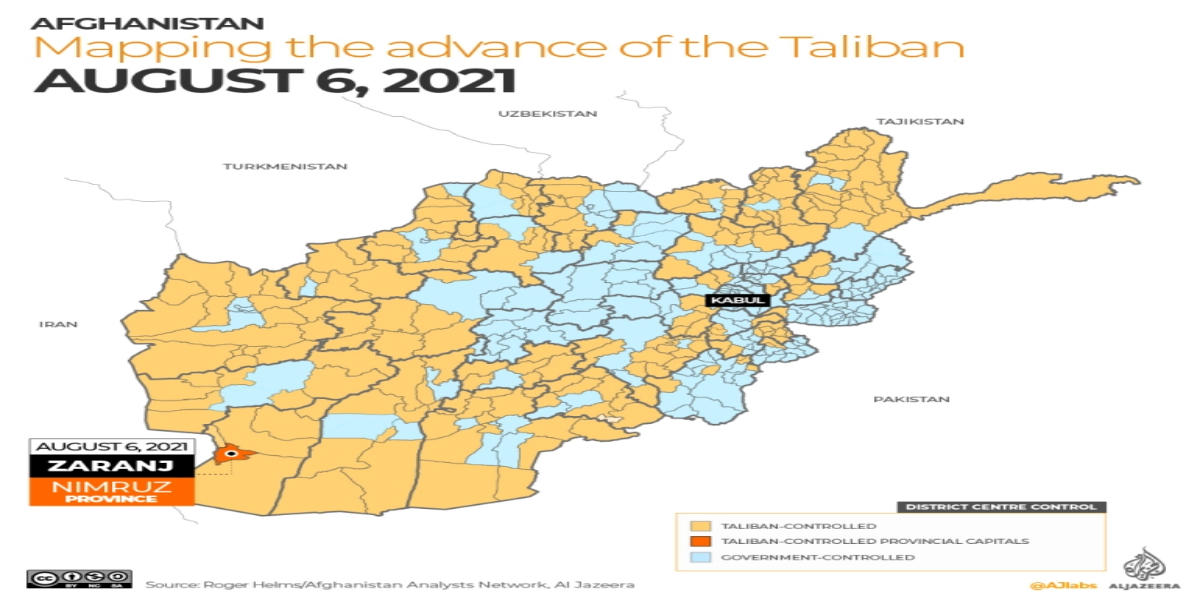 KARACHI: The delayed berthing of oil products vessels caused a loss of...

Gas crises to continue for another two years: SSGC

KARACHI: The gas crisis, being faced during the winter season, is likely...

KABUL: "He was a pilot of an American plane, not the driver...

PRAGUE: At least two volunteer firefighters were killed in an explosion at...

Citi Pharma to set up subsidiary in Uzbekistan