German missions in Pakistan to celebrate Unity Day on October 3

German missions in Pakistan to celebrate Unity Day on October 3

KARACHI: Germany is celebrating the 31th anniversary of German reunification on October 3, 2021, a statement said on Friday.

This year is very special for both Pakistan and Germany, as they commemorate the 70th anniversary of cordial diplomatic ties.

Due to the pandemic, the German missions in Pakistan must sadly once again refrain from the usual German national day festivities.

Instead, the German Embassy Islamabad and the German Consulate General in Karachi decided to go online on Sunday, October 3, 2021 at 6:30pm on the embassy’s Facebook page and YouTube channel for a digital celebration with very special guests.

“Naturally, we regret that we cannot celebrate in person with all our friends and partners here in Islamabad. However, we are making the best of it by offering everyone a glimpse into what we at the German missions are up to on a day-to-day basis. Do join us – there will be some great music, too!”, Bernhard Schlagheck, German ambassador to Pakistan, said.

“Having been posted to Karachi for a year already, I am still amazed by all the warmth and hospitality extended to me and my family by the wonderful people of Sindh. We wanted to give something back by hosting this virtual event where we showcase some of the many fields in which Germany and Pakistan work together to an amazing effect,” Holger Ziegeler, German consul general in Karachi, said.

“Germany firmly believes in further deepening its bilateral ties with Pakistan in all fields. We are looking forward to working and further contributing to that goal during our time in Pakistan,” he added. 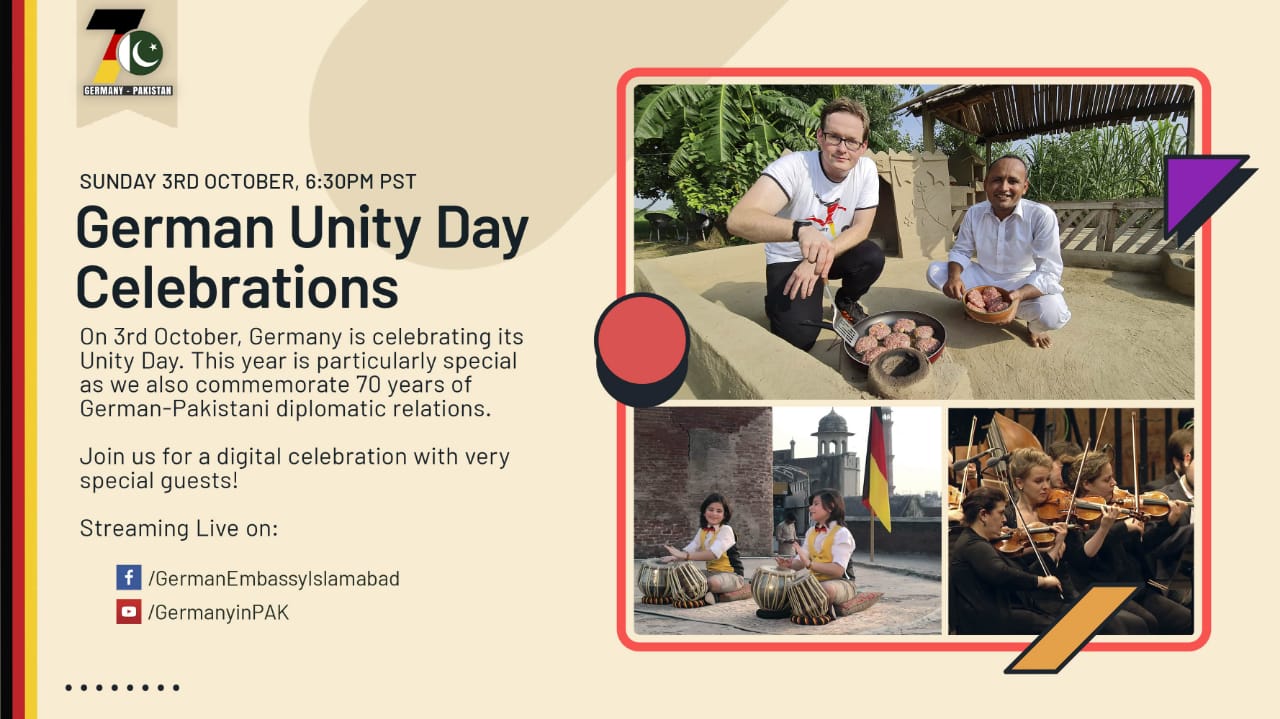 What does the digital event entail?

First, the Pakistani national anthem will be played by Ustad Ashraf Sharif and friends, a fusion music group based in Germany; followed by the German national anthem by young tabla virtuosos Riyan and Isaac.

After that German Ambassador to Pakistan Bernhard Schlagheck, German Consul General in Karachi Holger Ziegeler, and Head of Economic Cooperation and Youth Ambassador Marion Pfennigs briefed the participants about their life and work in Pakistan.

Minister of Foreign Affairs Heiko Maas will give a short address. The event will also be joined by Village Food sensation Mubashir Siddique who will try out some German recipes with the embassy’s Head of Commerce Christian Böttcher.

Dr Chris Schmotzer, director of the Rawalpindi Leprosy Hospital, will brief about her journey of more than 30 decades in which she has dedicated herself to the treatment of leprosy, tuberculosis and skin diseases in Pakistan.

The celebrations will be concluded by a classical music piece: The West-Eastern Divan Orchestra will play Edward Elgar’s Variation IX, ‘Nimrod’, conducted by Daniel Barenboim.

LAHORE: Amid reports of a hike in petroleum prices, Opposition Leader in...

PPP workers gear up for nationwide protest against inflation

LAHORE: Pakistan Peoples Party (PPP) workers and leaders are gearing up for...

The ongoing stand-off between the government and military over the appointment of...