Hundreds of people are gathering in the village of Rijal Almaa in Saudi Arabia’s southwestern Asir region to attend the Flowerman Festival, an immersive event which includes a variety of activities exploring the region’s history and traditions.

The festival celebrates the ancient tradition of wearing garlands, decorative wreaths of flowers and leaves that can be worn as headdresses or around the neck. 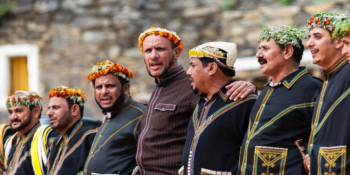 It also showcases some of the village’s most important customs dating back to the 1950s, including regional folklore dances and the colorful murals local women paint on the walls of their homes.

The Ministry of Culture, which organized the festival, said on its official Twitter page, “The Flowerman Festival celebrates the ancient tradition of wearing beautiful floral garlands, with events that showcase this important part of the rural culture in Rijal Almaa in the Southern region of Saudi Arabia.” 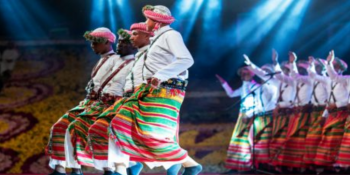 The ministry added that the event aims to highlight a time when people were connected to nature and created flower crowns from nature’s bloom.

Flower crowns are popular among male members of the Qahtan tribe in the Asir province.

The floral headpieces are usually made of red and orange blooms, which the tribe believes will enhance their beauty and health, and are often worn to ward off headaches or sinus problems.

The three-week event, which is taking place from August 12 until the end of the month, is part of Al-Soudah Season, a month-long event promoting outdoor activities in Asir.

The 2020 Nobel Prize in Literature has been awarded to the American...

The 2020 Nobel Prize in Chemistry has been awarded to Emmanuelle Charpentier...

REPORT: World’s billionaires added all time high in their wealth amid COVID-19

The latest report by Swiss bank has revealed that the wealth of...

The 2020 Nobel prize in physics has been awarded to the three scientists...

Meghan Markle broke down in tears before last royal meetup

Prince Harry and Meghan officially stepped down as senior royal members in...