The Civil Aviation Authority (CAA) partially suspended all direct flight operations between China and Pakistan amid fear of deadly coronavirus.

According to a notification issued by CAA, the direct flight operations between two countries will remain suspended till February 02.

“Please be informed that as per a decision by the Competent Authority at the appropriate level, all direct flight operations between Pakistan and China are to stalled on immediate basis, initially till February 2, subject to subsequent review,” read a notification. 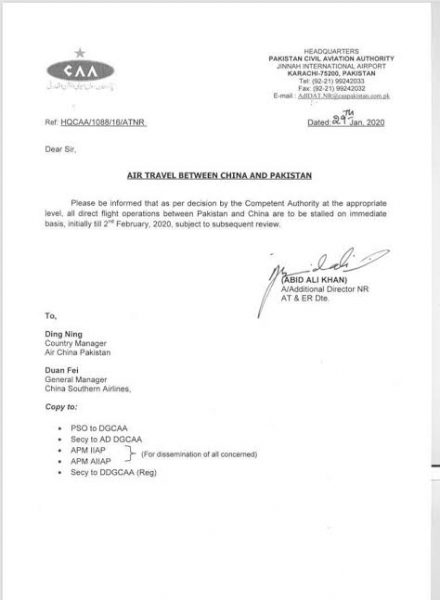 China Airline announced that it partially suspended its flights between Beijing and Karachi in the light of Wuhan virus.

Remember that the total number of confirmed deaths from the newly identified pathogen in China rose by 38 to 170 and infections also jumped.

Chinese health authorities said 7,711 confirmed cases reported of infection as of the end of Wednesday.

Mostly in Hubei province where the death toll rose by 37 to 162.

Moreover, World Health Organization (WHO) declared an international emergency over the deadly coronavirus from China.

“Our greatest concern is the potential for the virus to spread to countries with weaker health systems. This is not a vote of no confidence in China,” WHO chief Tedros Adhanom Ghebreyesus told.

The World Health Organization which initially downplayed a disease that has now killed 170 in China, was readying to meet Thursday to decide whether to declare it a global emergency.