He said Because of the system, people couldn’t make progress.

All facilities are available in shelters in the sever cold. A total of 170 shelters were established in Punjab and Khyber Pakhtunkhwa.

Pakistan had to become a welfare state. Pakistanis that went America and Britain got opportunities to become successful. In developed countries, every citizen has equal opportunities for development.

The state of Madinah is based on two principles: justice and humanity  The principles on which the State of Dinah was based was a successful model, The Muslims became a great nation by following the state of Madinah. It is our responsibility to take care of the weak and the poor,

Pakistan is the only country in the world that came in to being in the name of Islam.

Bad times come in the lives of nations so that they can be improved.

The Hunarmand Jawan program will be carried out in next four years, costing 30 billion rupees.

It will facilitate youth through easy loans, professional capacity-building, start-ups and internships.

In first phase, around 170,000 youth will give professional skill-based training.

Out of which 50,000 will train in areas of artificial intelligence, robotics and other advanced areas of technology. 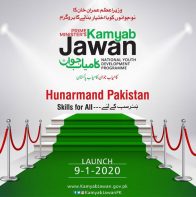 Whereas, twenty thousand youth will be given apprenticeship.

Around 75 smart class rooms will set up to ensure easy access to skill and professional education besides provision of such training at 70 Madaris.

Five Centres of Excellence will also establish under the program in collaboration with friendly countries.

Earlier, Prime Minister Imran Khan had launched the ‘Kamyab Jawan Program’ for the socio-economic development of the youth.

According to the details, cheques distributed among the successful applicants for Youth Entrepreneurship Scheme under Prime Minister’s Kamyab Jawan Program (PMKJP).

PMKJP received one million applications across the country which showed youth’s interest and accomplishment of the program.