Social-networking site Twitter has announced a brand new feature called ‘Topics’, which will let users keep up to date with subjects they care about with a single tap.

According to a press release, Topics is designed to help you find new and interesting conversations all in one place.

The new feature should take away some of the legwork of following certain subjects on Twitter.

Now you can follow specific topics to discover the Tweets you care about. pic.twitter.com/3tVBRFuTYd

Rather than manually and meticulously compiling your own list of accounts that you should follow, you’ll be able to tap on a single Topic, and Twitter’s algorithms will do the rest.

Topics will expand the reach of Twitter functions like following, muting, and adding to Lists beyond individual accounts to include tweets focused on a specific thing. 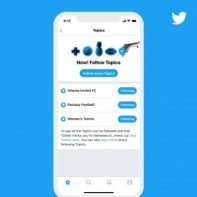 Topics will arrive on Web and Android on Nov. 13, but already appears in the sidebar menu on the current version of the Twitter iOS app.

Earlier, Twitter announced not to suspend or terminate user accounts originating from Pakistan, according to a statement.

On August 19, the government of Pakistan, in a letter to Twitter Vice President Trust and Safety Del Harvey, had said accounts of users from Pakistan were shut down without warning or prior notice.

The letter further said that suspending such accounts had caused massive unrest, resentment and anger among the general public, and asked Twitter to amend their policy this regard.

Chairman of the National IT Board Shabahat Ali Shah met with Twitter officials recently in which important issues between the Twitter administration and the government of Pakistan were discussed.

The government statement further revealed that Twitter will no longer unilaterally suspend the accounts of Pakistani users and will contact the government of Pakistan in case of any complaint beforehand.

What Shafaat Ali had to say about Ushna Shah’s anger?