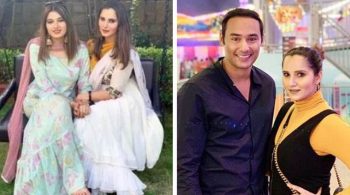 “She is actually getting married in December. We just came back from her bachelorette trip in Paris. We are really excited,” Sania Mirza told.

Anam shared a picture from her bridal shower recently.

Taking to Instagram, she has also posted photos with soon to be husband, Asad.

Speaking about her own marriage, Sania recently revealed that she was once asked to stop playing as “no one would marry” her if her complexion turned “dark” due to the rigors of an outdoor sport.

Sania, who has three doubles and an equal number of mixed doubles Grand Slams to her credit, reflected on the challenges she faced during a panel discussion on women and leadership.

Married to former Pakistan cricket team captain Shoaib Malik, Sania is currently working towards a comeback to the professional circuit next year after taking a break to become a mother.

If you haven’t already been swept up by Voilá AI Artist, here’s...