Renowned host and social media influencer have posted the good news on social media as his efforts finally bore fruit!

Sindh Text Book Board Jamshoro mentioned in a recent press release that a new book for Computer Science for class 9th is going to be published soon.

Sindh Board says in the press release, “This is to notify for all stakeholders, students, teachers, and general information that the textbook of computer science for Class-IX is under the process of publishing. The new edition as per the new curriculum of said Textbook will be available in the forthcoming session 2020-21.” 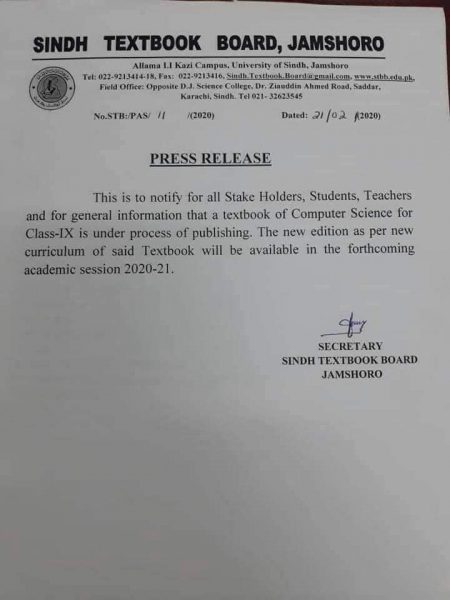 Waqar Zaka thanked Almighty Allah for his efforts. He also said that he can now call himself “The influencer”

Put criticism aside, but his contribution to society cannot be neglected!

The celebrity had made the best use of social media by speaking over the courses that were being taught in computer science books.

Matric Education System, Computer Text Book Protest updates, Tehrek-E-Technology Pakistan, is not here just to make one or two videos , highlighting one issue then moving on another, we will keep fight for our Next generation rights

Earlier last year, the celebrity Waqar Zaka had raised voice against the course being taught in matriculation.

The Sindh High Court issued notices to Sindh Chief Secretary, secretary establishment, secretary and director education, and other related officials over the modern education system in the country.

I am planning a protest , need your support , #TextBookChangeKaro @ImranKhanPTI pic.twitter.com/wsROXrnwXF

Filing a case against Education ministers for not updating Computer books for the last 20 years, I will go protest at Press Club if they don’t reply @ImranKhanPTI @BBhuttoZardari pic.twitter.com/a6wkYmhVNc

The infamous 'Joker' virus has been discovered in a variety of apps...