Harry Potter – made by students’ screens in GCU

Potter mania – love for Harry Potter reaches the next level in Pakistan. Potter heads from GCU, Lahore made a fan-made movie of the Harry Potter series.

The Last Follower and The Resurrection of Voldemort is Pakistan’s first fan-made Harry Potter movie series. It is made by the group young Ravians under their own production house Khyaali Production.

The fan-made movie is directed by Waleed Akram – also a student of Government College University, Lahore and visual effects for the flick are made by Zeeshan Hameed.

Watch the teaser of the film here:

It was a joint venture of the Khyaali production and GCU – Lahore. Premiered on March 08, 2020, at the University. The film duration consists of 1 hour and 24 Minutes.

Vice-Chancellor of the varsity Prof. Dr. Asghar Zaidi @zaidia was Chief Guest at the movie premiere which was attended by students & Ravians.

The film held his audience spellbound. Prof. Zaidi paid his heartiest wishes for the cast and production team of the film for success in life,

While the film has been screened in GCU, Waleed Akram – the director said that he hopes that it will be screened in other universities and is also working towards releasing the film in cinemas across the country. 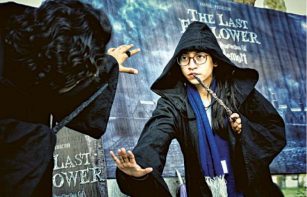 Why are the newly engaged Ahsan & Minal under severe criticism?

KARACHI: The rupee depreciated 45 paisas against the US dollar on Monday...