The organizer Huma Nassr has honored musicians in 13 genres of music and 3 special mention awards. Over 78 nominees in 13 categories were part of the mega event in Lahore.

Several nominees talked to media and shared their feelings on the elegant White Carpet event. 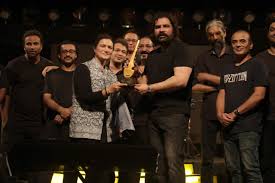 At the beginning of the SEPMA award ceremony, awards were given for the Child Music category. The nominees were Azan Ali Bagga and Syeda Hadiya Hashmi and the first presenter Mian Yousuf Salahuddin Sahab presented the SEPMA Award to the Nescafe Basement sensation.

After that, the award for the Best OST category was given. Singer Rahat Fateh Ali Khan won the award for his awesome song ‘Mere Pas Tum Ho’.