Iqra and Yasir visits Tharparkar with Mooroo and Ganji Swag

KARACHI: Pakistan’s most favourite couple have again won the hearts of their fans by taking a step for water-deprived community of the province.

According to the details, social media content creators Taimoor Salahuddin (Mooro), Junaid Akram (Ganji Swag) and others were also with them during this visit.

The ‘Suno Chanda’ actress shared a video on her Instagram page, showing some villagers talking about the water-scarcity in the area. Iqra’s spouse Yasir Hussain can also be seen in the video. She captioned the post: “Mai bohot khush hun k mujhy in logon se milny aur inki madad karny ka moqa mila”

It starts off with a man saying, “The water is 150 kilometers away from here. So all of us men have to leave home early in the morning for our labour, while these women take care of the food and water.” Following this, Yasir is asked to reiterate a story he may have already heard from a local about a woman who died while bringing water to her house.

“Yes, that lady was pregnant,” he says, “She was carrying a lot of water in that condition and so, she expired on her way.”

The conversation continues as Aziz also comes into the frame next to Hussain, facing against the camera. Her caption on the video is full of gratitude towards the work she was getting to do, as she coupled it with her take on the discoveries she and her husband have been making as part of it.

The starlet said she is surprised that life is so tough in a village, only five hours away from Karachi.

Yasir also shared a video on social media in which a villager can be seen embracing Iqra Aziz.

The actor shared that the woman in the video started crying after receiving an H2O wheel. Her eight-month-old sister died as she fell while carrying water, he added.

Yasir Hussain highlighted how we often leave the tap open where as people in Thar often sacrifice their life for a single drop of water. 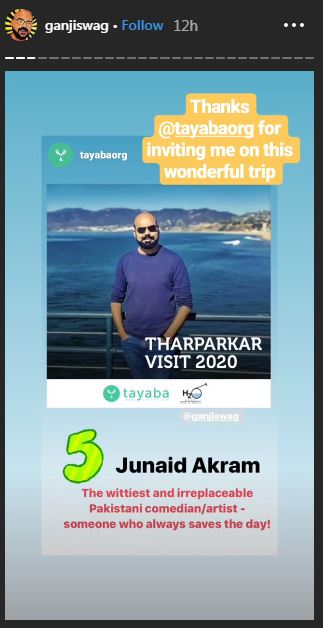 Both the content creators Ganji Swag and Mooroo shared the details on their insta stories and promised to share more in their upcoming vlogs.