Veteran singer Noor Jehan is being remembered on her death anniversary today. Her grandson, Ahmed Ali Butt, pays tribute to her.

Popular actor and host Ahmed Ali Butt to Instagram and shared a memory he had with the late legendary singer. He shared a photo he had with his mother, grandmother, and other family members.

He wrote the caption, “To the woman who stood in a man’s world and became the Queen,”

“Always in our hearts.” 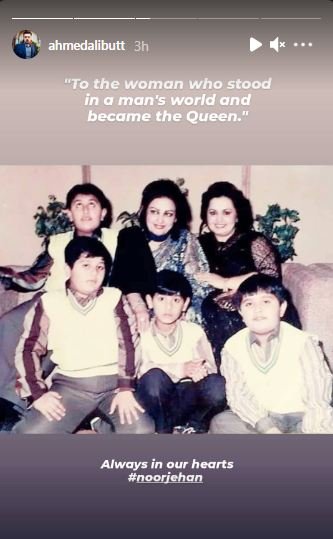 Born in the city of Sufi poet Bhulley Shah, Kasur on September 21, 1926;  Malka-e Taranum (real name Allah Wasai) became a stylish icon famous for her silk sarees, bold eye make-up and hairdos. She was a woman of substance.

She is estimated to have made more than 40 films and sung around 20,000 numbers during a career that lasted more than half a century.