Former US President Barack Obama on Saturday shared a video to his social media accounts where he talked about the two songs he sought inspiration from during his election campaign.

In the video posted on his Instagram account, Obama said he also mentioned the two songs in his book “A Promised Land” which inspired him during the campaign trail.

The former president said, “Whenever I needed some inspiration on the presidential campaign. I often turned to music. It was rap that got my head in the right place. Two songs especially: Jay Z ‘s “My 1st song, and Eminem’s lose yourself. Both are about defying the odds and putting it all on the line.”

As soon as Eminem came across Obama’s video, the Detroit rapper took to Instagram to share it with his millions of fans on social media.

Slim Shady shared the video to his Instagram stories with a folded-hands emoji. 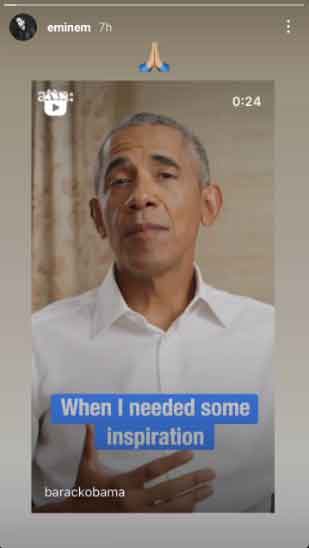 2021-22 Scorecard of Nat Geo: Which Shows Are Canceled? Which Are Renewed?

KARACHI: The rupee/dollar parity is likely to face further pressure on ballooning...