American singer Jennifer Lopez has expressed her gratitude to Joe Biden after he issued a statement on the situation that emerged Trump supporters stormed Capitol Hill in Washington DC.

Taking to her Instagram, the On the Floor singer posted a picture of Biden with his statement with a folded-hands emoji.

“At this hour our democracy is under unprecedented assault. Unlike anything we’ve seen in modern times…..Let me be very clear. The scenes of chaos at the Capitol do not reflect a true America. Do not reflect who we are. What we’re seeing are a small number of extremists dedicated to lawlessness. This is not dissent. It’s disorder. It’s chaos. It borders on sedition. And it must end.” 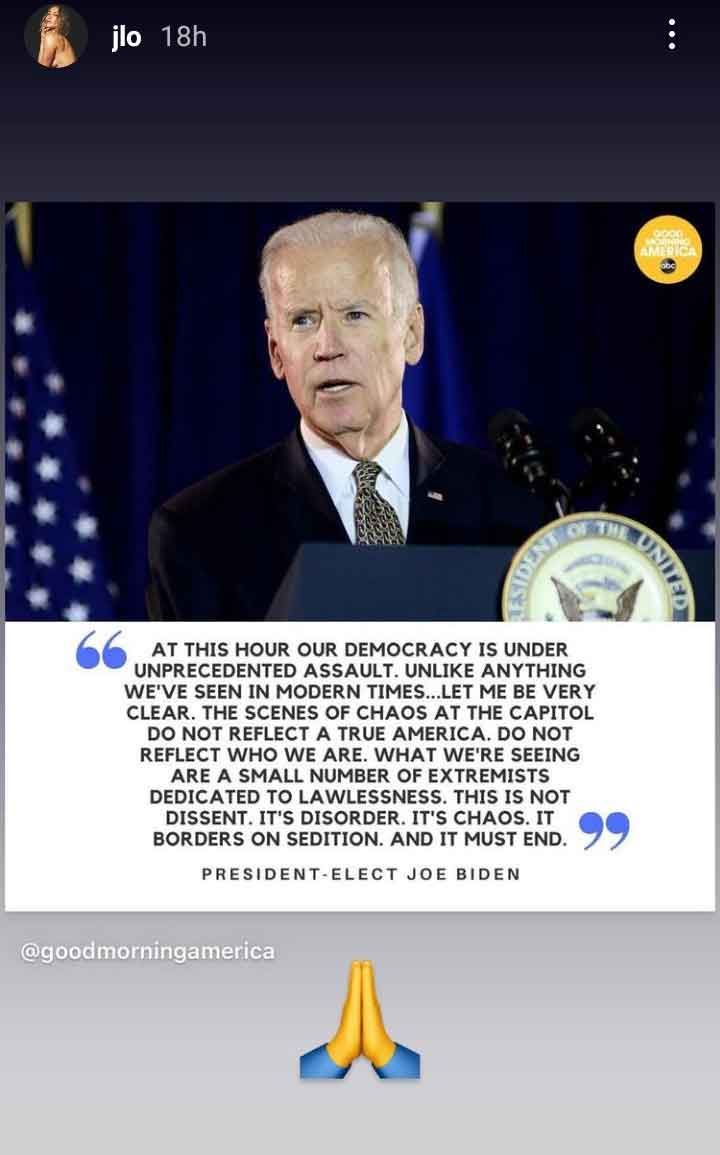 It is pertinent to mention here that disgraceful scenes were witnessed inside at US Capitol Hill in Washington, as violent clashes broke out between supporters of sitting President Donald Trump and the police.

To what observers described as an attack striking at the very heart of American democracy, the protesters tore down metal barricades at the bottom of the Capitol’s steps and were met by officers in riot gear.

Some tried to push past the police officials, who held shields, and the police could be seen firing pepper spray into the crowd to keep them back, even as the crowd shouted, “traitors”.

The violence soon moved inside the Capitol Hill building, with reports of firing at the premises. The violence also included the fatal shooting of a woman

The attack forced Congress to postpone a session that would have certified President-elect Joe Biden’s victory.

Kinza Hashmi confesses, "I'm here to work and will continue to working"

Riddle That Will Wrack Your Brain

4 Ways To Stop Yourself From Scrolling Social Media All Day

Most of us are stuck at home all day and night due...

Kinza Hashmi confesses, “I’m here to work and will continue to working”

Kinza Hashmi, an actress, discusses her career goals and how she has...