Hania Aamir is once again under hot water after her dance practicing video goes viral on the internet.

The dimpled actress in the video can be seen practicing for her new performance, wearing black track pants and a t-shirt. Social media users do not like the dance steps as Hania’s energy seems to be fully drained during the dance practice.

Netizens were quick enough to pass remarks and criticized her dancing skills.

After watching Hania’s dance, one of the netizens commented,

“What kind of hard work it is.”

“Move ur eyes with moves darling.” 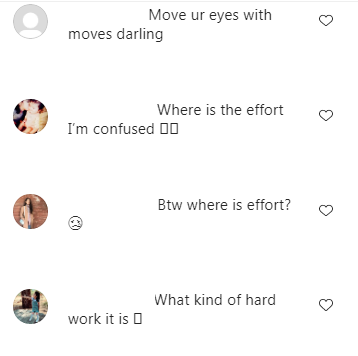 Earlier, Hania Aamir celebrated her 24th birthday with her friends and netizens miss Asim Azhar at the birthday party.

Actress Hania Aamir and singer Asim Azhar were rumored to be dating each other, however, the Dilruba actress revealed that Asim and her are just friends, and people started to make fun of the Tum Tum singer.

Hania Aamir emphasis on self care in recent post