Pakistani showbiz’s lovely couple Iqra Aziz and Yasir Hussain are expecting their first baby as the parents-to-be announced the news via their social media handles.

Soon after the couple announced that they are soon to welcome their first child, netizens, friends and fellow celebrities flooded the comments section with beautiful prayers, best wishes and love for the soon-to-arrive baby.

However, the conversation between the two has us all wondering whether Minal Khan is tying the knot soon with actor Ahsan Mohsin Ikram. 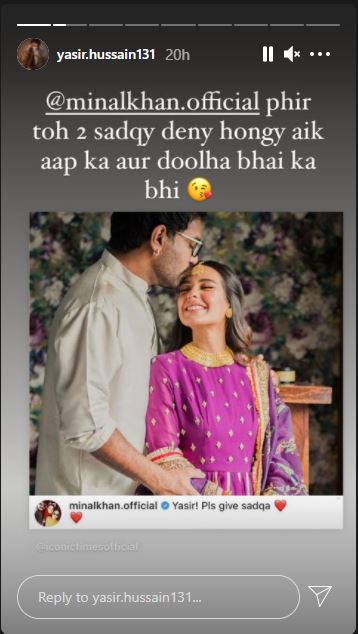 Earlier, the Jhooti starlet had shared multiple pictures from her baby shower event alongside her husband Yasir as she adorably cradled her growing baby bump.

Earlier, showbiz stars Minal Khan and beau Ahsan Mohsin Ikram had confirmed their engagement this Valentine’s Day and later celebrated one year of their romance.

The couple got engaged after confirming that they are dating in November last year following Minal’s 22nd birthday.

Radhe Title track - The title track of the upcoming movie of...

While everyone has been obsessed with comparing and contrasting Bollywood’s leading ladies...

Talented actress Sonya Hussyn is serving supreme elegance as she all smiles in...

Radhe Title track - The title track of the upcoming movie of...

Abtaha Maqsood talks on managing ‘faith’ and ‘game’ together during Ramadan

For an athlete who routinely consumes more calories a day than some...