Showbiz actress Zoya Nasir, who recently called off her engagement with Christian Betzmann, is not having social media trolls spewing hate, sleaze and passing judgements.

“Too many cowards sitting behind their keyboards with no fear of consequences. You don’t achieve greatness by spewing hate, sleaze and passing judgements. You just achieve another level of being the scum of this earth,” she added. 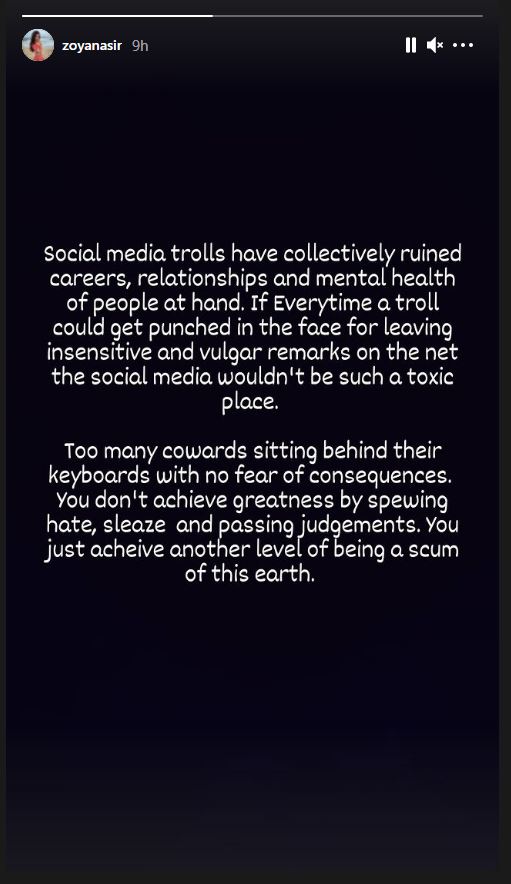 Earlier, Zoya Nasir had announced her breakup with her fiancé Christian Betzmann after the controversy created uproar all over the internet after his remarks on Israel’s aggression against Palestine.

Taking to Instagram, Zoya Nasir has officially announced that she and Betzmann are no longer together. “It’s with a heavy heart I’m announcing that Christian Betzmann and I are no longer engaged to be married. His sudden change in stance towards my culture, my country, my people and insensitivity towards my religion has lead me to take this difficult and irrevocable decision,” she wrote.

The actress further added, “There are certain religious and social boundaries that can’t be crossed no matter what, hence, the decision to part ways. Humility, Tolerance and Respect towards each other are the virtues that we must always adhere to. I look upon my Allah to provide me with the strength to deal with this worldly emotional wreck. I wish Chris a bright and happy future.”

Zoya concluded by saying: “I sincerely request for space and privacy for myself and my family as we begin to navigate this emotional turmoil.”

Showbiz actress Zoya Nasir has announced her breakup with her fiancé Christian...