She wrote in her tweet, “Question for my Pakistani followers – Can anyone please tell me how I can find an English translation of the lyrics to the great Nusrat Fateh Ali Khan’s song. Athra Ishq Ni Saon Denda?”

In this situation, a Pakistani reached out to immediately help Jemima and responded to this tweet while sharing a link of a YouTube video. 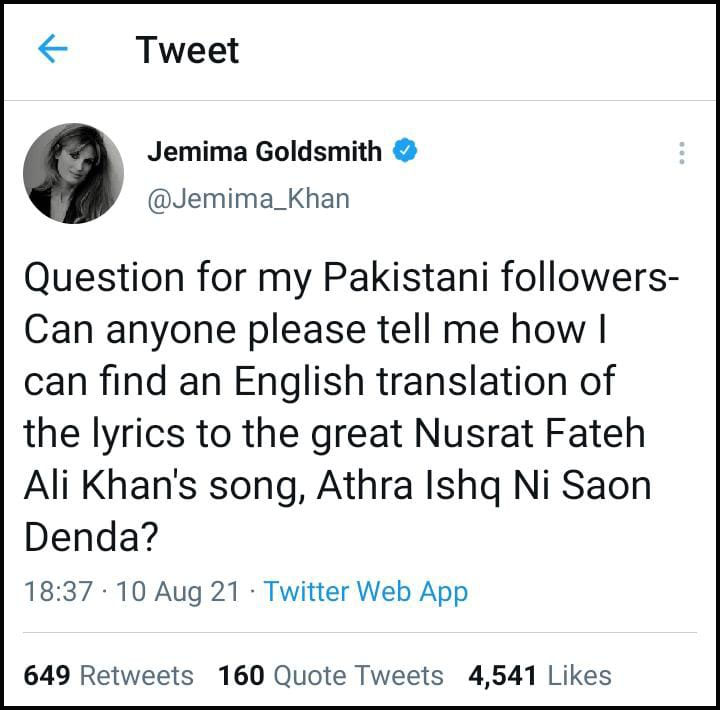 In response to the user, Jemima thanked the user and said that it was really helpful.

Jemima deleted her tweet shortly after the confusion over the English translation of the popular qawwali was resolved.

It should be kept in mind that Jemima continues to adorn the news in Pakistan every day as is evident via her interesting tweets.

It has been a long time since the divorce of the Prime Minister from his first wife, but fans still talk about the couple and the love they shared.

It should be noted that Jemima Goldsmith and Imran Khan got married in 1995. Jemima spent 9 years with Imran Khan in Lahore from 1995 to 2004.

The former couple has two sons, Sulaiman Isa Khan and Kasim Khan, who currently study in London and live with their mother.