Hina Khan opens up on her recent weight gain, ‘I chose mental health over my physical appearance’

Ali Ansari shared a jaunty photo of himself with the caption of Indian song, “Ounchi hae building, lift teri band hae . Lekin ghabrana nahi hae, mae phir bhi aounga (the building is high, and your lift is not working, But don’t worry I will still come.)”

In the photo, the star vaunted his looks in a formal getup stunning pose in a black suit attire.

Ali snap along with the caption seems to have melted his fiancee’s heart as Saboor Aly adorably commented “waiting”. 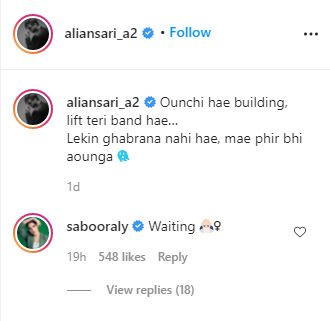 Power couple actors Ali Ansari and Saboor Aly, who recently exchanged rings in an intimate ceremony, are receiving much love from their fans as they make a cute and strong bond together.

Outspoken Baldwin made comeback with '30 Rock' and Trump

Halsey loves being a mom more than being a musician

Halsey seems to be enjoying her life as a mom more than...

Duran Duran has released a new album 40 years after their debut.

On Mehndi night, dapper groom Usman Mukhtar stunned many of his followers...

Pooja Hegde is a complete fashionista, and her style progression is proof...

Outspoken Baldwin made comeback with ’30 Rock’ and Trump