Acclaimed actress Hina Mani has shared a heartbreaking clip in remembrance of her late father, Syed Farukkh Jamal, who breathed his last a few days back.

Sharing a throwback clip from host Sameena Peerzada’s show, Hira Mani was heard saying: “My father was the only one who always clapped for me. I love him so much.”

“And now I love Mani this much because I see my father in him. He is the one who made me real Hina Mani.”

Also, actress Aiman Khan took to the comments section to write, “Father are so precious,” followed by a heart emoticon. 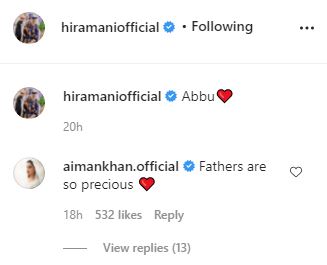 However, after his death announcement, the Do Bol starlet also shared a heartbreaking note on Instagram. She uploaded a post her late father had shared on his social media reading, “Death is the gateway to a new life, so be careful. Don’t do anything bad to others and secure your new life after death.”

In the caption she wrote, “Mere abbu ki bohat achi achi baatien thien waqtan fawaqtan app sub se share kerti Rahungi Insha’Allah (I’ll keep sharing the valuable advice my father would give with you guys every now and then).”

It is pertinent to mention here that Salman Sheikh aka Mani did not share any details about the cause of Jamal’s death.

IPPA 2021: Celebrities went off to Turkey for the awards ceremony, see photos

Atif Aslam is a worldwide famous Pakistani singer, songwriter, and composer. He...

Iqra Aziz & Yasir Hussain are going on a vacation from Dubai

Iqra Aziz and Yasir Hussain, a power couple, are taking a short...