Kangna Ranaut wishes Kareena Kapoor a happy Birthday: ‘most gorgeous of them all’

Kangna Ranaut wishes Kareena Kapoor a happy Birthday: ‘most gorgeous of them all’

Kareena Kapoor received a birthday greeting from Kangana Ranaut. She referred to her as ‘the most gorgeous of them all’.

Kangana Ranaut wished Kareena Kapoor Khan a happy birthday, despite speculations that she may replace Kareena in an upcoming film as Sita.“Happy birthday to the most gorgeous of them all.” Kangana wrote with a collage of her photos on Instagram Stories on Tuesday. 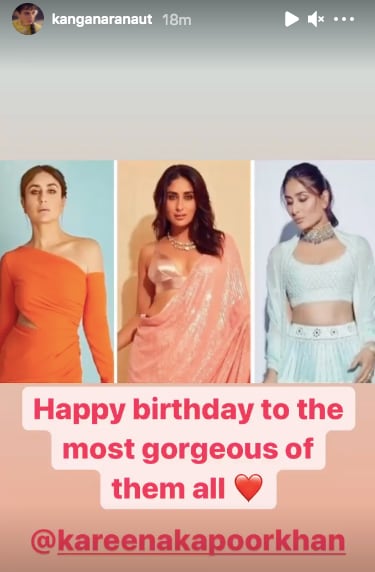 Kangana Ranaut has signed on to play Sita in Sita: The Incarnation, according to reports. In a social media post, the director announced the project.

“What was a mirage, is now a clarity. A dream of a pious character never explored is now a reality. I am ecstatic to bring Kangana Ranaut on board as Sita. This pious journey will change the course of how we perceive our mythology. Thank you SS Studio for your immense support and belief.” Kangana shared a screenshot of the tweet and wrote, “Thank you for this opportunity.”

Kareena Kapoor had already requested a higher pay to play Sita in a reworking of the Ramayana from her perspective. She addressed the reports in a recent interview with The Guardian, and said, “Just a few years ago, no one would talk about a man or woman actually getting equal pay in a movie. Now there are a lot of us being very vocal about it. I make it quite clear what I want and I think that respect should be given.”

She added, “It’s not about being demanding, it’s about being respectful towards women. And I think things are kind of changing.”