Kinza Hashmi, one of the rising stars of the Pakistani showbiz industry, has a social media presence that might end you up scrolling through her feed for hours.

The actress’ insta feed is no less than that of a model. She can pull off any outfit effortlessly in both eastern and western looks.

Hashmi looked like a breath of fresh air in a peach gharara with golden touch of gota work. Her makeup was subtle while her jewellery, minimal, as she adorned matching earrings and green bangles.

She also shared an all-smiling striking pose with bestie and fellow actor Saboor Aly from the star-studded event. 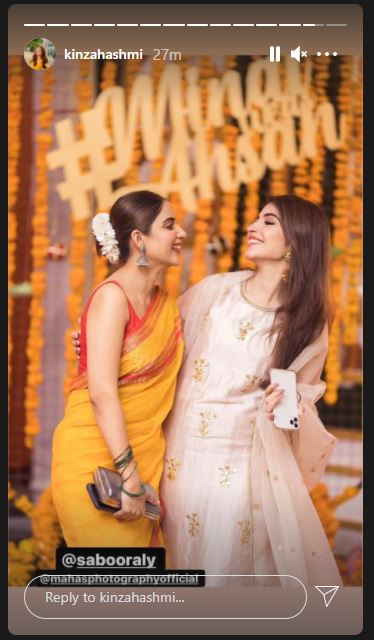 A star-studded Mayun event took place last night in an open space, with a number of fellow stars including Kinza Hashmi, Saboor Aly, Aamna Ilyas, Areeba Habib among others joined the function ahead of Minal and Ahsan’s big day.

Minal nailed the traditional mayun look with a yellow outfit, gold earrings and necklace, green bangles and gajras. While Ahsan was wearing a black kurta with a printed yellow waistcoat.

Kinza Hashmi has always been incredibly intelligent with her amazing personality and her great array of clothes. She definitely loved by teenagers.

However, the actress has also managed to create quite a good fan-base for herself with her sweet personality.

On the work front, the actress is seen showcasing her incredible acting skills in the drama serial Azmaish. The fans couldn’t stop but praise Kinza’s outstanding performance in the character.