Mashal Khan is a Pakistani actress and model. She was born on January 25, 1997, in Karachi, Pakistan. She began her acting career with the Pakistani mega-hit drama, Sano Chanda.

In 2018, she made her debut, which was a huge success in Pakistan. The same drama made Mashal very popular. She is known for her leading roles in several televisions serials including Suno Chanda, Khaas, Dikhawa, Dulhan, and many more.

Mashal Khan has retaliated against a troll who threatened her with violence. The netizen abused her and threatened to attack her with acid.

She shared the message on her Instagram story and wrote, “This is beyond disgusting. This person’s life must be really pathetic for them to hide behind a screen and comment hallow threats under my pictures. PS cybercrime has been contacted.” 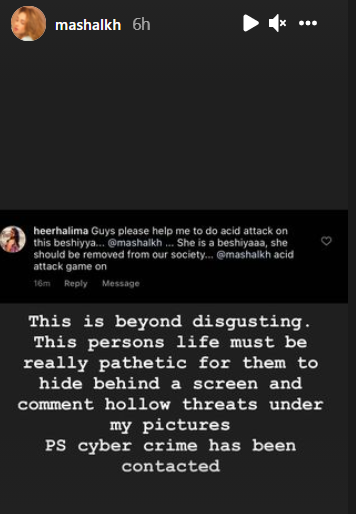 What Mashal Khan Has To Say About His Ex’s Engagement With Saboor Aly?

Pakistani Rupee against US dollar on October 26, 2021

KARACHI: The average customer rates of buying and selling of US dollar...