Meghan McCain is glad to be able to leave when she did.

When two co-hosts were hauled off The View after testing positive for COVID-19 on Friday, Sept. 24, the Daily Mail’s new online columnist had an… unusual point of view.

Just minutes before they were scheduled to interview Vice President Kamala Harris in person, Sunny Hostin and Ana Navarro were asked to leave the set. Joy Behar, the remaining host, stated that one of her coworkers had a “breakthrough case” of COVID-19. Harris was interviewed remotely by her and Sara Haines, with the lawmaker tuning in from another location in the ABC News headquarters as a precaution.

McCain, who departed her hosting role on The View in July, seemed to jump in a few hours later and offer her view on the situation. “Trust your instincts, kids,” she tweeted, along with a GIF of Clint Eastwood’s Blondie character in the 1966 film The Good, the Bad, and the Ugly offering a hat tip.

Some fans mistook this to mean she was happy with her decision to leave the program, while others suggested she should be more concerned about the well-being of her former co-stars. “I suppose I would have said something like,’ so happy my pals from the view are vaccinated and well,’ but that’s just me,” one wrote.

According to a source close to E! News, after leaving the table, Hostin and Navarro were given a follow-up quick test, which came back negative. According to the insider, the plans for taping The View next week are still up in the air. 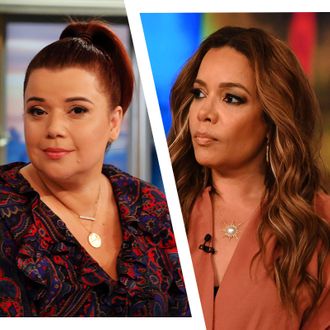 Their positive tests were “totally unexpected,” according to the source. As soon as they heard the news, the team moved into “response mode,” and the showrunners “sprang into action.”

“No one could believe this was happening in front of the cameras, right before one of the show’s major interviews,” the source said. “No one had time to consider how this may affect the show’s appearance; the notion was that we needed to act quickly and ensure that everyone was safe.”

According to the source, Hostin and Navarro were also “totally startled” because they were not exhibiting any symptoms.

“Your father would not be proud right now,” one person said, referring to John McCain. “I’d think you’d be a little more sensitive since Sunny and her husband lost both of their parents to COVID and they were taking every care, unlike people who aren’t vaxed,” one person remarked.

Hostin said in January that her husband, Emmanuel Hostinparents,’s had died of COVID-19 over the holidays.

She said to the audience, “They were both doctors, and they were both quite cautious. We concluded it wasn’t safe to celebrate Thanksgiving with them, so we didn’t. We still don’t know how they got the virus, despite extensive contact tracing.”

McCain announced his departure from the show about three months ago, saying, “I’m here to tell all of you my great co-hosts and the viewers at home that this will be my last season on The View.” It was said by her “It wasn’t an easy choice… It took a lot of thought, advice, prayer, and discussion with my family and close friends.”

The new mother revealed that she will be relocating to Washington, D.C.

Emraan Hashmi is preparing for his next project, Dybbuk - The Curse...

Aymen Saleem, aka Mishi, the 'Chupke Chupke' star, announced her next project...