Russian President self isolates after people in his circle catch coronavirus

World Iodine Deficiency Day is marked on 21st October annually for the need of awareness about nutrient deficiency.

One of the conditions that are becoming common among people include nutritional deficiencies. This is due to their unhealthy diet patterns followed by an unhealthy lifestyle. Nutrients are required by the body in order to perform various functions. For these nutrients to be fulfilled, the body relies on the intake of food.

A common deficiency found in humans is lack of iodine. While paying attention to the intake of vitamins and minerals, we often forget to take care of iodine requirements which is needed in our body to be able to perform certain functions.

It is one of the integral nutrients required by the body. Iodine is primarily needed to make the thyroid hormones. These are responsible for the metabolism, bone development, and brain health along with various other functions. Sufficient iodine is deemed necessary for infants and pregnant women.

How much Iodine does one require?

The need for iodine in one’s body varies according to age. 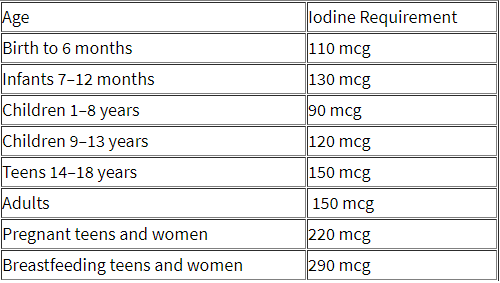 Complications of not consuming enough Iodine

National Institutes of Health and the US Department of Health and Human Services list the following complications of iodine deficiency.

Potassium iodine is a thyroid-blocking agent which should be consumed to lower the risk of thyroid cancer in radiation emergencies. It is recommended by the American Thyroid Association for women who are pregnant to take a daily supplement of 150 mcg iodine as potassium iodide.  Iodine supplements improve reasoning abilities and overall cognitive function in children with mild deficiency.

A high dose of iodine supplements may reduce pain and other symptoms of fibrocystic breast disease. Intake of iodized salt along with consumption of a healthy diet, including seafood or dairy products, is one of the key prevention measures.

According to the preliminary research suggestions, an antiseptic nasal spray containing povidone-iodine...

The SARC-CoV-2 virus, that causes coronavirus, has been shown to infect a...

To assist fight the COVID-19 pandemic on a global scale, the EU...

The Syrian province of Idlib, one of the last remaining rebel strongholds...

The French government experiences a standoff with tens of thousands of healthcare...