In India, You have to Pay to breath !

Oxygen in the polluted India have now become a business venture, where a bar has gained attention in the Indian capital.

According to the details, the Extremist Indian Prime Minister who launched the clean India Campaign has miserably failed, city’s air contains tiny and toxic pollutants that penetrate lungs and bloodstreams and cause life-threatening diseases.

Out of this hazardous air quality in the capital, a local has found a business opportunity. As damaging air quality has blanketed India’s capital city, a small entrepreneurial venture named Oxy Pure provides something the people rarely get in the city – ‘pure air’.

Each session of oxygen-therapy costs between $4 and $7, depending on the flavour a customer opts for. At least seven flavours – lavender, cinnamon, spearmint, peppermint, eucalyptus, lemongrass and orange — are on the menu.

Customers are given a lightweight nasal tube for supplementary oxygen intake. The device is clipped to nostrils and with each breath aroma-infused oxygen enters human lungs.

The owner of the oxygen bar says the concept exists in many countries abroad and he experienced it in the United States two years back. 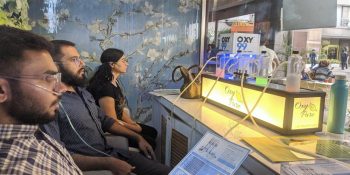 “The beginning wasn’t as good as we expected it to be but slowly awareness grew about the brand. But due to the rise in pollution levels there has been a sudden increase of people coming to breathe pure air at the Oxy Bar,” said owner of the Oxy Pure, Aryavir Kumar.

“The number has almost doubled since last month,” he added.

A study of the Air Quality Life Index by the Energy Policy Institute at the University of Chicago, released this month, said that the life expectancy of people living in the Indo-Gangetic Plain, comprising of the states of Bihar, Chandigarh, Delhi, Haryana, Punjab, Uttar Pradesh and West Bengal, has reduced by up to seven years due to poor air quality.

Indians are blaming the Prime Minister for pollution in the country. They are expressing their anger for paying to have fresh air.