George Floyd’s death: Thousands of people gather in the UK, the US to protest

Thousands of people have gathered to join anti-racism protests across the UK, despite officials advised not to gather due to coronavirus.

Several people have gathered to protest against the killing of George Floyd in the cities including London, Manchester, Cardiff, Leicester, and Sheffield.

Protests knelt for a minute’s silence before raising slogans “no justice, no peace” and “black lives matter”.

The international news agency reported that protesters threw missiles and fireworks at a police line.

The Metropolitan Police said that police horses were used to control the situation, but one horse galloped ahead and rider fell. Police have arrested 14 people and 10 officers were wounded as a smaller group became “angry and intent on violence”.

Mayor of London Sadiq Khan told the protesters in a tweet, “I stand with you and I share your anger and your pain” and said the small minority of people who became violent “let down this important cause”.

Home Secretary Priti Patel said the social distancing advice was “for the safety of all of us”, while Met Police Commissioner Dame Cressida Dick said the protests were “unlawful”.

Britain’s world heavyweight champion boxer Anthony Joshua told the crowds: “We can no longer sit back and remain silent on this senseless, unlawful killing and sly racism on another human being.”

Thousands of people Protested in the US 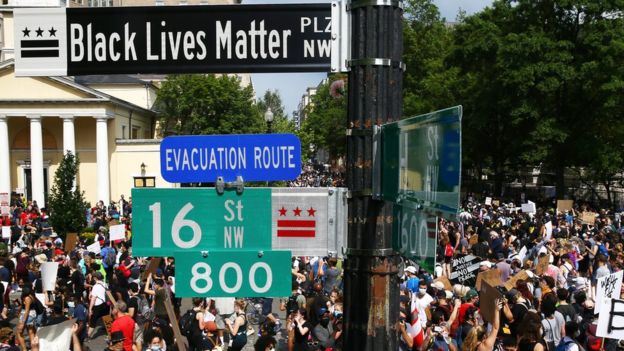 Security forces blocked ways that lead towards the White House.

Meanwhile, people also paid homage to George Floyd in North Carolina where he was born, before a memorial service.

Protesters peacefully gathered near Capitol, the Lincoln Memorial and outside Lafayette Park, next to the White House, at the newly renamed Black Lives Matter Plaza. Mayor Muriel Bowser said the crowds had sent a message to President Donald Trump.

“If he can take over Washington DC, he can come for any state, and none of us will be safe,” she said. “Our soldiers should not be treated that way, they should not be asked to move on American citizens.”