President Donald Trump retweeted a video in which one of his supporters was seen shouting “white power”.

President’s opponents and supporters were seen abusing one another in the video.

The supporter was among the people who attended the rally led by Trump at a retirement complex in Florida.

Donald Trump has dismissed the claim that he is looking to capitalize on racial tensions. His spokesperson said that he did not hear the “white power” comment. 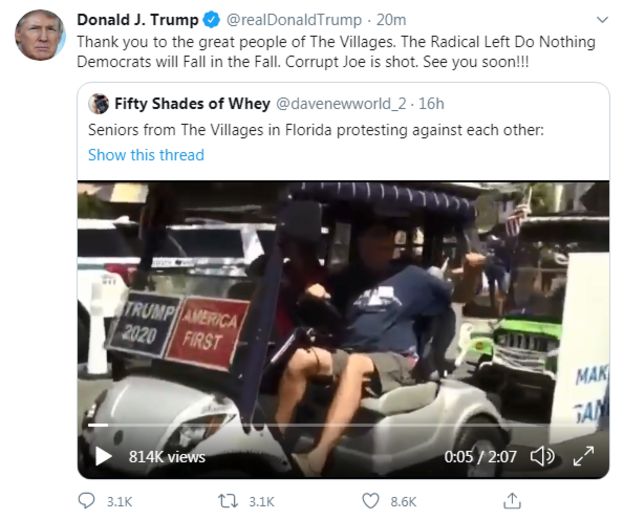 The president, in the tweet, showed gratitude to “the great people of The Villages” as he referred to the retirement community north-west of Orlando where the rally was organized.

He wrote, “The Radical Left Do Nothing Democrats will Fall in the Fall. Corrupt Joe is shot. See you soon!!!,”

He shared the video in which a Trump’s supporter raised his clenched fist and screamed “white power”. He was seen responding to an opponent who called him a racist. Other anti-Trump protesters shouted “Nazi”.

Tim Scott, the only black Republican in the US Senate, called the video “offensive” and urged the president to remove it.

He said while giving an interview to the international news source, “There’s no question that he should not have retweeted it and he should just take it down,”

White House spokesman Judd Deere said the president “did not hear the one statement made on the video” but saw “tremendous enthusiasm from his many supporters”.

The US Secretary of Health and Human Services, Alex Azar, said to the international source that “neither the president, his administration nor I would do anything to be supportive of white supremacy”.

An Indonesian migrant worker, who was convicted of murder in Saudi Arabia,...

Students from foreign countries will not be permitted to stay in the...

Taj Mahal, one of the most attracted tourists' spot in India, will...

US to ban chinese social media apps including Tik tok

The United States is considering a full time ban on Chinese social...

Dil Bechara: Trailer breaks record of Avengers and Game of Thrones on YouTube