Is it the RSV, flu, or COVID? A few traits can be used to differentiate between the illnesses

A nationwide surge of respiratory diseases is being caused by COVID, the flu, and respiratory syncytial virus (RSV).

According to information from the Department of Health and Human Services, over 76% of hospital inpatient beds in the United States are full. While the number of paediatric beds is roughly the same, six states have 90 percent or more of those beds filled.

Since they all have a number of similar symptoms, COVID, the flu, and RSV can be challenging to diagnose. However, knowing which virus you have is important since it affects the medicines you should take and how long you should isolate.

Each virus can be distinguished from one another by particular characteristics, such as symptoms or the course of the sickness. Here are five things to think about.

Some signs are specific to certain viruses.
Any of the three viruses or a regular cold can induce a runny nose, cough, congestion, or sore throat. However, Covid is more frequently linked to a loss of taste and smell than the flu or RSV. Additionally, wheezing is frequently a symptom of a severe RSV infection, which is typically observed in children or older adults. 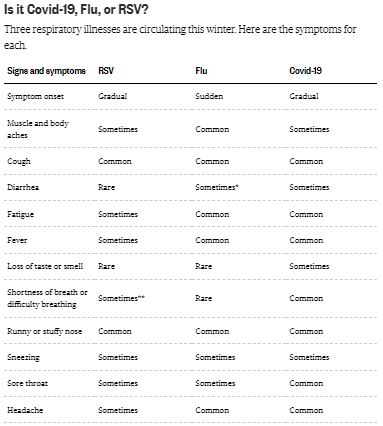 But a test is the only surefire way to find out.

Dr. Frank Esper, a paediatric infectious disease specialist at Cleveland Clinic, said: “I don’t think anybody would ever go, ‘Hey, listen, I think you have a virus based on your symptoms,’ and feel confidence to say what virus that is.”

Are the symptoms developing gradually or suddenly?

“Flu typically starts out with a sudden fever that develops very quickly. RSV and Covid, where we imagine a steady development in symptoms, are somewhat in contrast to that, said Dr. Scott Roberts, an infectious disease specialist at Yale Medicine.

When was the last time you were exposed?

The interval between exposure and the onset of symptoms varies for each sickness. Flu symptoms often occur two days after virus exposure, whereas RSV symptoms typically take four to six days to manifest, and the typical incubation period for Covid is three to four days for the omicron type.

Since the incubation period for the flu can be as little as 24 hours, Roberts noted that if someone attends a party and develops symptoms the following day, they likely have the flu.

The symptoms and severity of an illness are significantly influenced by age.
Unlike COVID and the flu, RSV is unlikely to make an otherwise healthy adult feel particularly ill.

“In general, it’s probably not RSV if you’re a young, healthy adult or you’re not at an extreme of age and you get really serious disease,” Roberts said.

Babies, kids with lung conditions, adults 65 years of age and older, and those with compromised immune systems are the populations most susceptible to severe RSV infections.

As children return to regular school and social activities this year, many of them will be exposed to respiratory viruses for the first time. As a result, their bodies may struggle to rid themselves of the infection, which can result in symptoms that are more severe.

Esper claims that about one-fourth of kids experience gastrointestinal symptoms brought on by viral infections, such as diarrhoea, stomach pain, or vomiting. With RSV or seasonal flu in adults, that occurs less frequently.

Conversely, individuals with compromised immune systems are more susceptible to any of the three viruses’ severe symptoms or pneumonia.

Think about which virus is most prevalent in your neighbourhood

Covid cases are expected to increase over the holidays as more people travel and congregate indoors, according to disease specialists. Over the past two weeks, the average number of daily cases reported to the Centers for Disease Control and Prevention has already increased by almost 11%.

However, because many people conduct at-home tests, it might be challenging to determine local Covid transmission levels. Contrarily, RSV and flu testing are done in a doctor’s office or with a prescription.

Flu cases, on the other hand, are surging. The percentage of influenza tests that were positive on a national level increased from 8% in the week ending October 30 to almost 15% in the week ending November 13. Hospitalizations for the flu are at their highest level for this time of year in more than ten years.

With two weeks, according to Esper, the Cleveland Clinic will be “swimming in flu.”

However, the picture varies by region. “We had RSV jump over the last one to two months and it’s really plateaued,” Roberts said of the Northeast. “As for flu, we’ve just seen an exponential growth over the past few weeks.””

“They kind of witnessed the opposite in the Southeast of the United States, in Georgia, Alabama, and Mississippi. They originally noticed an increase in flu cases, and now RSV is catching up, he continued.

RSV does not have a vaccination or well accepted treatments, unlike Covid and the flu.

“RSV probably terrifies me the most because there is nothing you can do to prevent it and so many young children haven’t experienced it. In our children’s hospitals, we’re truly experiencing record spikes,” Roberts added.

Nevertheless, doctors typically recommend Tamiflu or one of the other three recognized medicines to shorten the duration of flu symptoms. Doctors may recommend Paxlovid for some Covid patients.

The single most essential thing people need to do is go get vaccinated, Jha said during a briefing on Tuesday. “In this moment where we have a lot of flu, still have a substantial number of RSV, still got a good bit of Covid,” he added. It prevents you from visiting the hospital.

Is it the RSV, flu, or COVID? A few traits can be used to differentiate between the illnesses

The three viruses, which are causing an illness wave across the country,...

Catch all the International News, Breaking News Event and Latest News Updates on The BOL News

Singapore erases its troubled LGBT past

Democrats reject Trump's call for the "end" of the constitution

St. Edward's Crown leaves the Tower of London prior to the coronation