WhatsApp down Worldwide: MESSAGING APP NOT WORKING FOR USERS ACROSS WORLD

WhatsApp, the popular messaging platform is currently facing connection issues. Users report that they are unable to send or receive messages.

WhatsApp, the popular messaging app is currently not working properly for many users across the world and in Pakistan. The users have been complaining about connection issues as they are unable to send or receive any messages over the messaging application. WhatsApp calls are also not connecting for many users. According to the website Down Detector, the Facebook-owned app has been facing issues worldwide since around 1:39 AM. Until now, over 1109 users have reported issues with WhatsApp on the website. 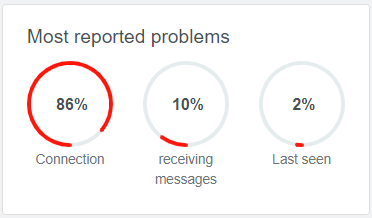 Twitter is also trending with the hashtag #WhatsAppdown with users from all over reporting the same issues.

Checking Twitter to see if WhatsApp is down pic.twitter.com/xX0SEipgap

WhatsApp is down and it’s stressing my life 🥴🥴🥴 pic.twitter.com/SRrrD5GJeF

Are you still on twitter to check that WhatsApp is really down ??#whatsappdown pic.twitter.com/oryfqcYgrZ

In case you are facing same issues on your phone, we recommend you to wait for some time as the issues are on the server end. Do not try uninstalling the app as it will totally lock you out of the app until the connection is restored..