TLP Leader Khadim Hussain Rizvi died Lahore. He was admitted in Sheikh Zaid Hospital Lahore. Khadim Rizvi was suffering from fever since last few days, family sources. He was taken to Sheikh Zayed Hospital in emergency today where he died. Huge number of Tehreek-e-Labbaik workers have gathered at his house to mourn his death. 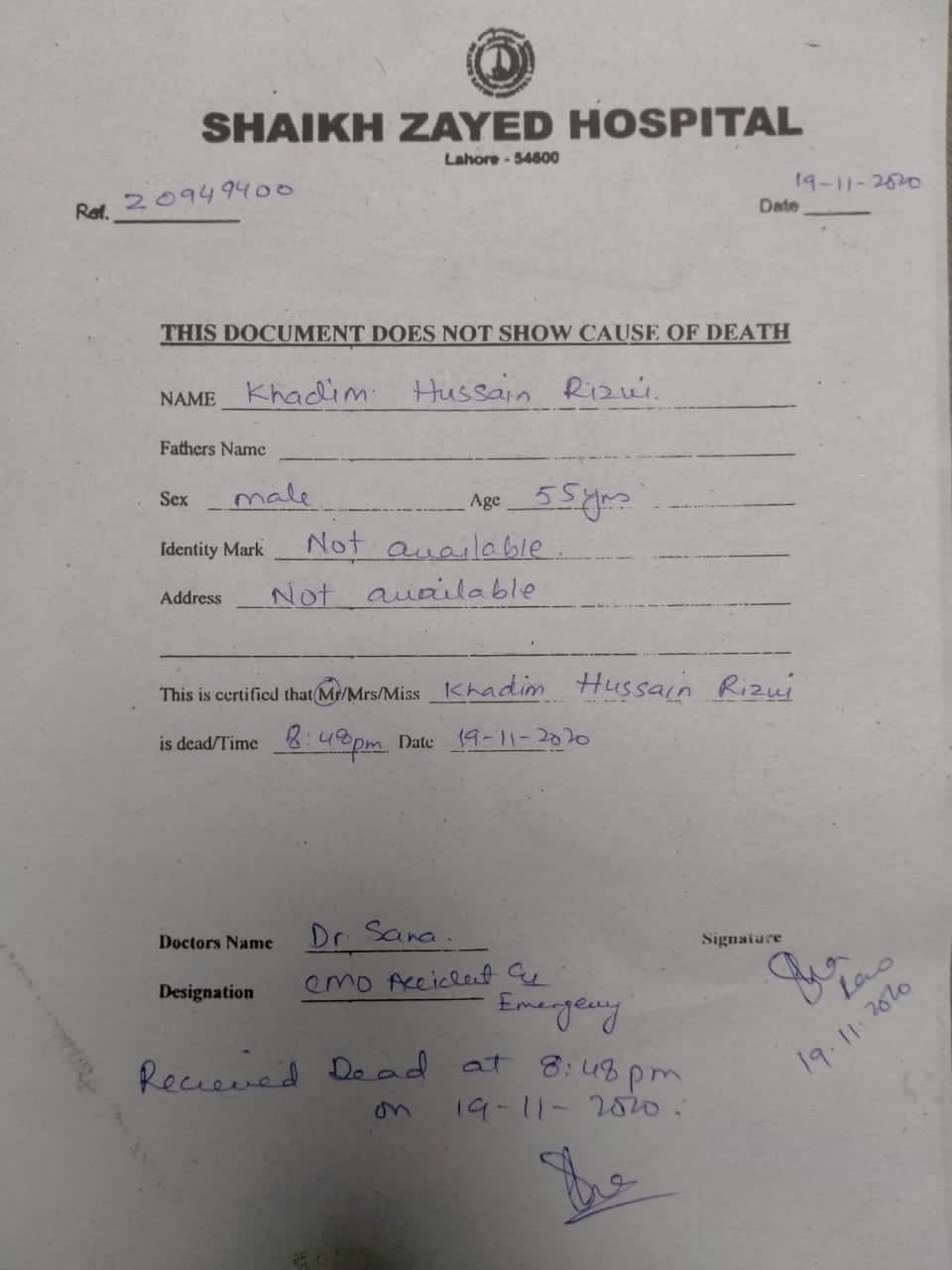 Khadim Rizvi was born in Attock district  of Punjab on June 22, 1966. For his early education, he studied Hifz and Tajweed from a madressah in Jhelum and later on studied from the Jamia Nizamia Rizvia in Lahore.

Several political figures expressed their grief over his death

Tehreek Labbaik is as political face of the TLYR, which was formed in 2016 after Qadri, the convicted murderer of former Punjab governor Salman Taseer, was executed. The group demands death for blasphemers and strict implementation of its version of Islamic law in the country.

Before November 2016, only a few knew the wheelchair-bound cleric Khadim Hussain Rizvi. His political party, Tehreek-i-Labbaik Ya Rasool Allah (TLYRA), had certainly drawn the interest of journalists and political analysts.

By the time his 21 day long dharna at Faizabad which had paralysed Islamabad over almost three weeks brought an unconditional capitulation of the state to his demands, almost every Pakistani had become familiar with him.

But few still know exactly who Khadim Hussain Rizvi is, where he came from and what he represents.

Khadim Rizvi was born in Attock district  of Punjab on June 22, 1966. For his early education, he studied Hifz and Tajweed from a madressah in Jhelum and later on studied from the Jamia Nizamia Rizvia in Lahore.

He has memorized the Holy Quran and is an ardent follower of the Islamic theologian Ahmed Raza Khan Barelvi, who was born in Bareilly in India in the 19th century and founded the Barelvi school of thought. Khadim Hussain took up the name Rizvi as a tribute to Ahmed Raza Khan.

As the government appointed Imam of the Pir Makki Mosque in Lahore, Khadim Rizvi earned a reputation as a firebrand speaker and charismatic leader among his followers. He has a penchant for the poetry of Allama Iqbal, and his sermons are replete with Persian couplets written by the great poet.

He had been confined to wheelchair since 2006 after an accident in Gujranwala. Rizvi got injured because his driver fell asleep while driving from Rawalpindi to Lahore.