The third wave of corona virus infection has informally arrived in South Africa, health authorities said, with rising caseloads and a slow vaccine rollout is fuelling fears of fresh strain. 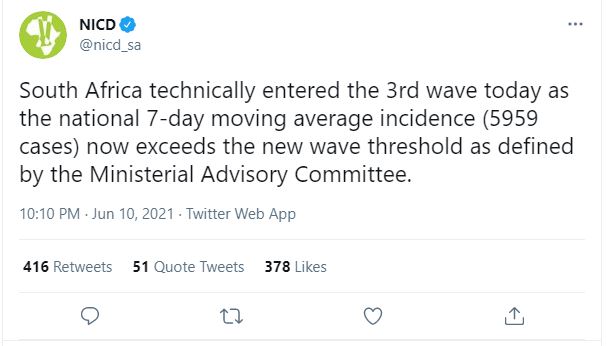 The health ministry later declared that it had detected over 9,100 cases in 24 hours.

Four of South Africa s nine provinces were hardly hit by a third infection wave in late May, including the most crowded Gauteng province.

President Cyril Ramaphosa last month constricted a nighttime curfew and reintroduced limits on social gatherings in a bid to stem the spread of the virus.

To date, South Africa has recorded more than 1.7 million corona virus cases around 34 percent of the continents reported infections of which at least 57,410 have been fatal.

The country was hit by a second wave in December that peaked at around 10,000 new cases reported per day.

South Africa and India are pressing the World Trade Organization to renounce intellectual property rights on coronavirus jabs and drugs in order to ease production and access for developing countries.

WHO warns COVAX might face vaccine shortfall in June-July

A shortfall in COVID-19 vaccine doses going through the COVAX program in...