At least 13 killed in the twin Kabul airport blasts

At least 13 killed in the twin Kabul airport blasts

There were at least two explosions near Kabul’s airport amid a huge evacuation effort from Afghanistan, the Pentagon said on Thursday, with civilians and US service members among the casualties, Reuters reported.

Pentagon spokesman John Kirby said one blast occurred near the airport’s Abbey Gate and the other close to the nearby Baron Hotel. Two US officials said at least one of the explosions appeared to be from a suicide bombing.

“We can confirm that the explosion at the Abbey Gate was the result of a complex attack that resulted in a number of US and civilian casualties,” Kirby said on Twitter. “We can also confirm at least one other explosion at or near the Baron Hotel, a short distance from Abbey Gate.”

A Taliban official said at least 13 people were killed in the blast, including children, and many Taliban guards were wounded.

Video: Casualties from bombing attacks at the Kabul airport have been transferred to Emergency Hospital. Reuters quoted a Taliban official saying at least 13 people have been killed. The US Pentagon is reporting at least 2 blasts, one near Abbey Gate & the other near Baron Hotel. pic.twitter.com/vgs7pudEcA

A US official told Reuters as many as three US service members were among those hurt, and that US casualty numbers were expected to increase, according to initial information. At least one of the US personnel was seriously hurt, an official said.

The US Embassy in Kabul described “a large explosion” and said there had been reports of gunfire.

The explosion came after the United States and allies urged Afghans to leave the area because of a threat by Islamic State.

A massive airlift of foreign nationals and their families as well as some Afghans has been under way since the day before Taliban forces captured Kabul on August 15, capping a swift advance across the country as US and allied troops withdrew.

President Joe Biden has been briefed on the explosion, according to a White House official. Biden was in a meeting with security officials about the situation in Afghanistan, where the United States is in the final steps of ending its 20-year war, when the explosion was first reported, according to a person familiar with the matter. 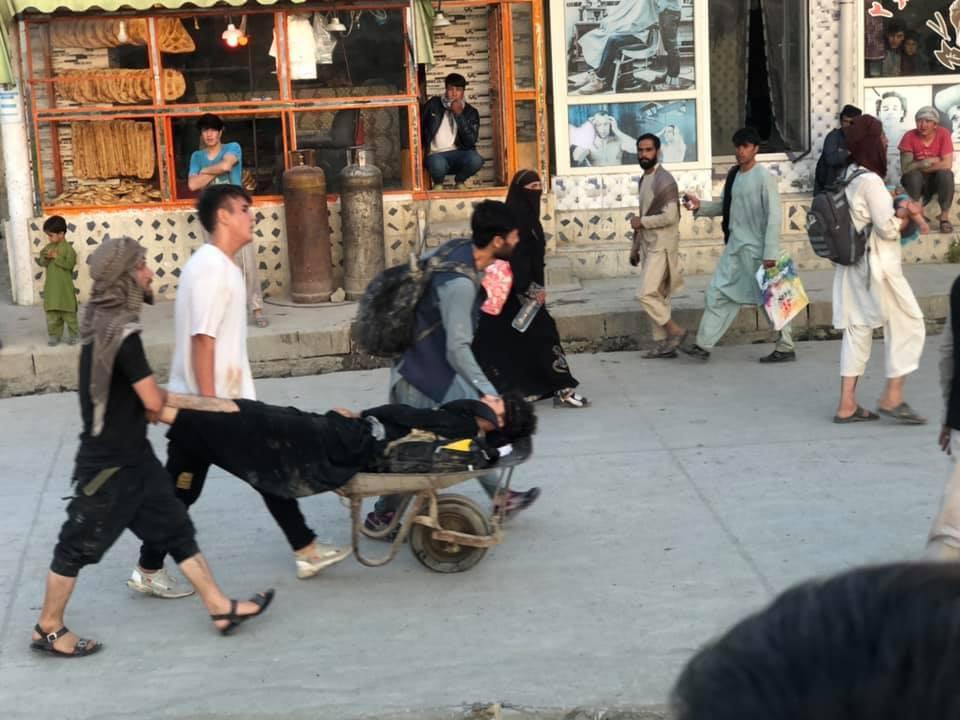 The United States has been racing to carry out the airlift before its military is set to fully withdraw from the country on Aug. 31.

In an alert issued on Wednesday, the US Embassy in Kabul had advised citizens to avoid traveling to the airport and said those already at the gates should leave immediately, citing unspecified “security threats.”

A Western diplomat in Kabul said that areas outside the airport gates had been “incredibly crowded” again despite the warnings.

The United States and its allies have mounted one of the biggest air evacuations in history, bringing out about 95,700 people, including 13,400 on Wednesday, the White House said on Thursday.

More than 95,000 Afghans and foreigners have fled Afghanistan via the US-led airlift since the hardline Taliban movement took control of the country on August 15.

Huge crowds continued to throng the airport, their bid for a way out of Taliban rule becoming increasingly desperate ahead of the August 31 deadline set by Biden to end evacuations and withdraw troops.

Biden and his aides have not budged on the hard deadline — even as some foreign nations warned they would be forced to leave at-risk Afghans behind.

The Pentagon had earlier Thursday reiterated that operations would continue until the cut-off.

But several Western allies have already wrapped up their airlift operations including Canada, whose government said it was “truly heartbreaking” to leave behind those who wanted to be rescued. – Islamic State threat.

In recent years, the Islamic State’s Afghanistan-Pakistan chapter has been responsible for some of the deadliest attacks in those countries.

It has massacred civilians at mosques, shrines, public squares and even hospitals.

The Taliban have promised a softer brand of rule from their first stint, which ended in 2001 when the United States invaded because they gave sanctuary to Al-Qaeda.

But many Afghans fear a repeat of the Taliban’s brutal interpretation of sharia law, as well as violent retribution for working with foreign militaries, Western missions or the previous US-backed government.

There are particular concerns for women, who were largely banned from education and employment and could only leave the house with a male chaperone during the group’s 1996-2001 rule ‘A painful moment’.

Some of the Afghans massed outside the airport have foreign passports, visas or eligibility to travel, but most do not.

Several people have died in the chaos around the airport in recent days.

Despite the harrowing scenes, the Taliban have ruled out any extension to next Tuesday’s deadline to pull out foreign troops, describing it as “a red line”.

Turkey, which had more than 500 non-combat troops stationed in Afghanistan, said Wednesday it had started pulling out its forces.

The withdrawal signalled an apparent abandonment of the plans it had been negotiating to help secure Kabul’s strategic airport after the American departure.

The Dutch government described it as a “painful moment” that would leave behind some Afghans eligible for evacuation.

PARIS: The OECD warned on Tuesday of an ‘uneven’ global economic recovery, as...

Blossoming Saudi fragrance market to hit over $3.8 billion by 2030

DUBAI: The Saudi fragrance market is poised to reach $3.8 billion by...

Teenage Afghan girls were not allowed to return to school on Saturday,...