KARACHI: Pakistan Meteorological Department (PMD) Early Warning Centre said on Friday that a deep depression over the northeast Arabian sea had intensified into a cyclonic storm, and the system was likely to move west-southwestwards towards Oman/Makran.

In its fifth alert, the department said that the storm was at a distance of 280-km southwest of Karachi, 230-km from Ormara and 470-km southwest of Gwadar. The estimated maximum sustained surface wind is 65- 85km/hour and sea conditions are rough/very rough around the system centre, it added.

Earlier in the day, authorities in Sindh and Balochistan had adopted a high alert mode after the PMD issued a worrying warning for Cyclone Gulab.

The weather system was also getting powerful amid stronger winds on Thursday and uprooted several structures in Karachi, including poles, with scattered drizzling. The PMD had warned that the cyclone was expected to affect Sindh and Balochistan, especially their coastal areas with heavy rainfall and gusty winds.

The fishermen were also advised not to venture into the sea till October 3 as the sea conditions will be rough to very rough. 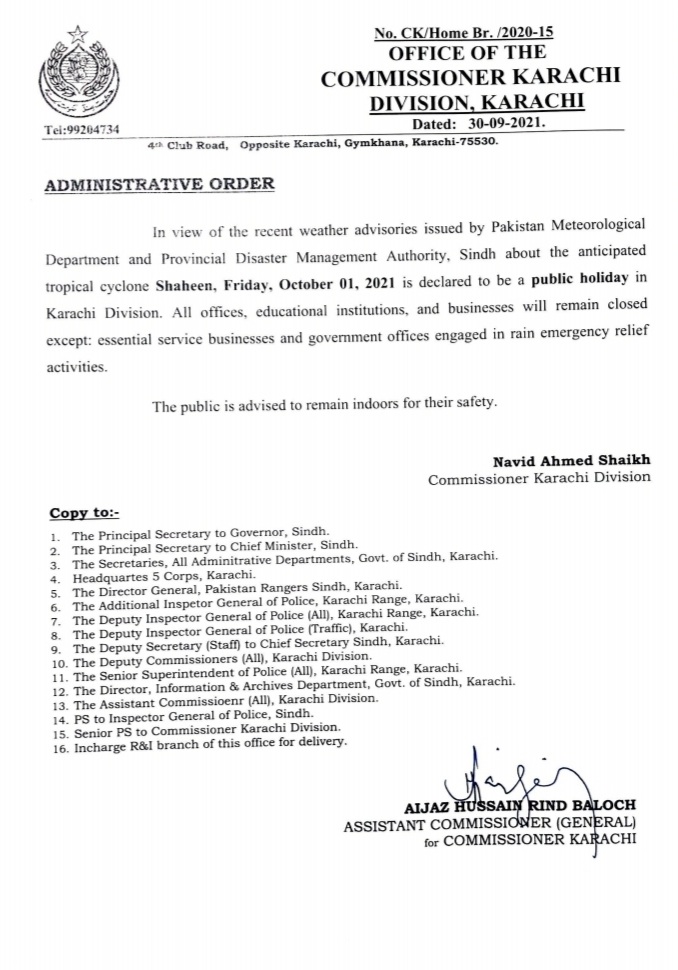 In a notification issued on Thursday, Shaikh said that all government offices and businesses in Karachi will remain closed today amind the cyclone threat.

Keeping in view the situation resulting from expected tropical cyclone & the rainfall, it has been decided that Friday the 1st of October will be a public holiday. All offices, educational institutions & businesses except essential services shall remain remain closed in Karachi

ISLAMABAD: Eid Milad-un-Nabi, a day of spiritual significance, is being celebrated across...

In Pictures: Eid Milad-Un-Nabi in Pakistan

Eid Milad-Un-Nabi marks the birthday of the Prophet Muhammad (PBUH). It is...