The ongoing stand-off between the government and military over the appointment of the country’s top spymaster may end, after the Prime Minister Office finally released the notification designating Lt Gen Nadeem Anjum as director general of the Inter Services Intelligence (ISI).

“The prime minister has seen and approved the appointment of PA-27007 Lt Gen Nadeem Ahmed Anjum, HI (M) as director general Inter-Services Intelligence, with effect from 20, November, 2021, from the panel of officers at para 6 of the summary,” read the notification. 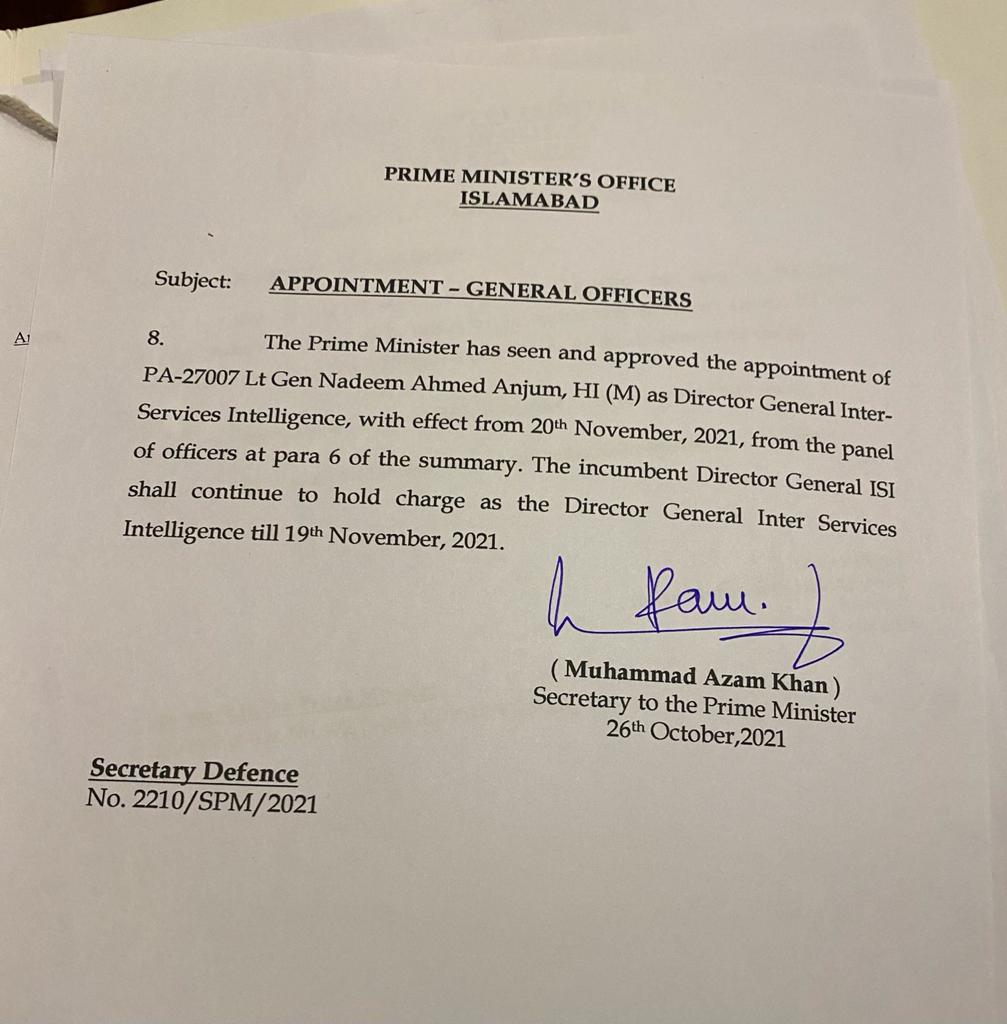 The notification came after PM Imran met Chief of Army Staff General Qamar Javed Bajwa for the “final round of consultations” on the key appointment.

“The meeting was part of the ongoing consultation process between the PM and chief of army staff about the timing of change of command in ISI and selection of the new DG ISI,” tweeted the PM Office.

During this process a list of officers was received from ministry of Defence. Prime Minister interviewed all the nominees. A final round of consultation was held between the Prime Minister and Chief of Army Staff today.

The PMO confirmed that PM Imran during the process of the appointment “interviewed all the nominees” for the post.

PM’s interview of candidates was reported by multiple news outlets, based on sources. However, officials had remained quite about the issue in public.

The notification would finally end the three-week deadlock over the appointment of the new chief of the country’s top spy agency.

The deadlock had gripped the nation during the past few weeks and has been a topic of hot debate and discussion in the media as well as at every talk show on the leading television channels since early this month.

The issue snowballed into a major controversy after the federal government did not notify the new DG ISI’s appointment despite the announcement made by the military’s media wing — Inter Services Public Relations (ISPR) — on October 6.

The issue was much debated as the delay in the appointment had caused problem’s in the army’s routine postings announced on October 6.

As per the notification, the three-star general was supposed to relinquish charge as corps commander Karachi and hand over the reins to Lt Gen Muhammad Saeed.

However, Lt Gen Saeed was unable to leave his post of president National Defence University, which created further problems.

Due to this issue, Lt Gen Nauman Mahmood could not relinquish the command of Peshawar corps as his posting for president NDU was not vacant.

Not only this, Lt Gen Mahmood could not leave the post as Lt Gen Faiz was not directed to leave his seat at the ISI and take over the command in Peshawar.

LAHORE: The Lahore Police is currently clueless about the alleged attack on...

Pakistan ranked fifth among countries most vulnerable to climate change

KARACHI: Pakistan is ranked fifth among a list of countries that are...

Head of the National Command and Operation Centre Asad Umar announced on...

At least two soldiers were martyred after terrorists attacked a military post...

ISLAMABAD: The Islamabad High Court (IHC) on Saturday directed the law and...