The marchers should be provided necessary assistance, relief: PM

Prime Minister Imran Khan on Wednesday has taken notice of difficulties being faced by the protesters of Jamiat Ulema-e-Islam-Fazl’s (JUI-F) anti-government Azadi March.

In a post on Twitter, the premier has directed the chairman of Capital Development Authority (CDA) to immediately visit the area and provide all the facilities to the protesters who are holding sit-in.

The statement came after marchers shifted their camps to concrete surfaces following intermittent rain in the metropolis.

I have directed the CDA Chairman to immediately visit the dharna site to assess what relief and assistance can be provided to the dharna participants with the onset of rain and changing weather conditions.

The demand has been emphasized on social media that the government should provide the necessary equipment to keep the marchers safe from the cold and rain.

Murad Saeed, Member of the National Assembly also reacts to PM’s direction saying that the government should accommodates the ‘Azadi March’ protesters.

On the other hand, deadlock between government and opposition committees has continued to persist as the first round of talks on Azadi March ended without any progress.

Pictures of a few Azadi Marchers preparing to go to sleep in the biting cold and rain went viral on social media. 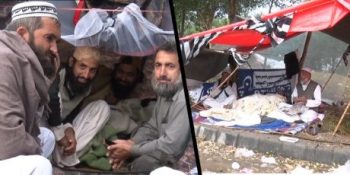 JUI-F chief Maulana Fazlur Rehman gave Prime Minister Imran two days to step down, failing which the protesters threatened to march to the PM House, ‘force’ the prime minister to step down, and ‘arrest’ him.

The government announced that they would approach the courts over Fazlur Rehman’s statements, accusing him of “instigating the people” and rallying them for mutiny.

Opposition leader in the National Assembly Shahbaz Sharif on Friday required the...

The other side of the coin

Citizens demand that encroachments be removed and nullahs be cleared before monsoon...

Senior Director Anti-Encroachment Bashir Siddiqui has submitted a report in the Supreme...