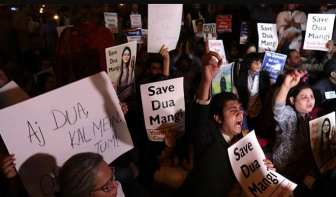 Her friend, Haris Fateh Soomro, who was shot in the neck and sustained wounds in chest, is still in critical condition in a local hospital.

Dua’s worried family and friends accompanied enraged protesters and activists to stage a sit-in at the busy Clifton junction.

They chanted against slow progress in the case and stressed on the lax security for women in the country.

A senior police official, told a local media that a preliminary probe into the case had revealed that a criminal gang had intercepted the Dua and her friend as they were walking on the road, injuring the boy and kidnapping her for ransom.

However, the girl’s family had so far not received any ransom call.

The police officials on Tuesday have recovered the vehicle used for the kidnapping of Dua Nisar Mangi near Shahrah-e-Faisal, Karachi.

According to sources, SSP Tanveer Alam said that the vehicle was found to be missing and that it would be executed.

The accused fled the vehicle but fingerprints were recovered from it, SSP said.

Police officials said that the found vehicle is very similar to the vehicle used Dua Mangi’s kidnapping, but both of its number plates have been dropped.

Police on Tuesday claimed to have arrested two alleged suspect students in the high profile case involved the kidnapping of Dua Mangi.

Investigation agencies believe that Dua Mangi’s kidnapping may be a case of exacting revenge.

Sources claimed that, Dua’s father told the police that her daughter had a fight with a boy named Muzaffar 10 days before her kidnapping.

The incident took place at around 8pm on a secluded road near an open-air Dhaba in Bukhari Commercial area.

On November 30, Dua Mangi was taking a walk with her friend, Haris when 4 to 5 armed men forced the girl get in their vehicle. When her friend Haris showed resistance, they shot him and sped off with Dua.

Soon after the kidnapping incident, various people posted on social media, informing the public and the concerned authorities of the incident.

An FIR has already been registered at Clifton’s Darakshan Police Station against unidentified men on behalf of the injured man’s father, Abdul Fatah.

This is the second major kidnapping incident of a girl in the Defence Housing Authority as earlier another young girl, was kidnapped in the same manner in May this year and was later released after her family paid a handsome ransom to the kidnappers.