UAE to stand with Pakistan on Kashmir issue

United Arab Emirates says it will stand with Pakistan to extend moral and diplomatic support to the oppressed Kashmiris for their right of self-determination.

He said the Kashmir issue needs to be resolved in accordance with the UN resolutions and aspirations of Kashmiri people. 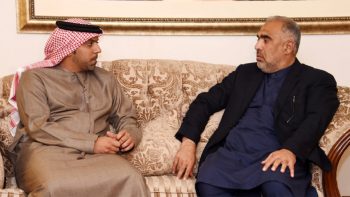 The Speaker National Assembly appreciated UAE’s support to Pakistan in FATF. He said Pakistan attaches great importance to its brotherly relations with the UAE, as both countries share strong religious, cultural and historical bonds.

That decision was accompanied by a harsh crackdown, with India sending tens of thousands of troops in addition to the 500,000 troops already present there, imposing a sweeping curfew, arresting thousands and cutting virtually all communications.

Most Kashmiris say that in doing away with Article 370, India hopes to change India-administered Kashmir’s Muslim-majority demographics by allowing in a flood of new Hindu settlers.

India’s top court said the federal government should restore normal life in Kashmir as soon as possible, as a partial shutdown of the disputed region entered its 42nd day.

Some of those curbs have been relaxed, but mobile communications in the Kashmir Valley are largely still blocked, and more than a thousand people are likely to still be arrested.

After Pakistani Prime Minister Imran Khan’s relentless global campaign against India over the abrogation of Jammu and Kashmir’s special status and the controversial Citizenship Amendment Act, the European Union (EU) Parliament has decided to debate and vote on a scathing resolution against the forcible annexation of occupied Kashmir in clear violation of United Nations Security Council resolutions.

Out of 751 members of the EU Parliament, 626 have moved six resolutions on both the issues. The diplomatic offensive by the EU against India comes ahead of Prime Minister Narendra Modi’s visit to Brussels for the India-EU summit in March.

The resolution also condemns enforcement of new citizenship laws by New Delhi that discriminate against Muslims. The resolutions, drafted and supported by lawmakers from the Renew Group, calls on the European Union and its member states “to promote the implementation of the UN Security Council resolutions on Kashmir”.

General Nadeem Raza, Chairman Joint Chiefs of Staff Committee, who is on...

Pakistan COVID-19: Cases Drops To Less Than 1,000 After Four Months

59 more deaths have succumbed to the COVID-19 in the country, while...

Google is making its Workspace suite of apps open to all customers...